The Dud Club is a Codex Entry featured in Battlefield 1: In the Name of the Tsar. It is unlocked upon obtaining 10 kills with the Dud Club. 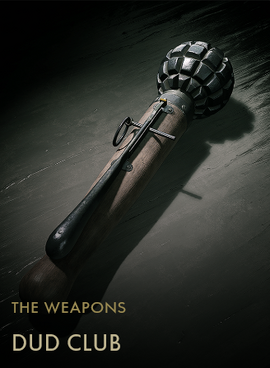 From 1915 Germany was manufacturing a massive stick grenade with a cylindrical head, which was impact detonated rather than having a timed fuse. The wooden handle had a spoon lever on one side, and after removing a pin and lifting the lever the grenade was armed and would detonate from a heavy impact and gravity – hopefully. This percussion type grenade proved quite unreliable, but it was most sensitive when landing on its head, so a modified design was developed using an even heavier cast iron body from surplus Kugelhandgranate M1913 fragmentation grenades. This model was called the Kugelhandgranate M1913/15 Poppenberg system, but still turned out to be too unreliable, and these types of grenades were withdrawn from service. During WW1 a huge variety of improvised trench clubs were used, and many were outfitted with whatever salvaged parts were available, like barbed wire, nails, heavy metal cogs and even the cast iron bodies of hand grenades. The very heavy Kugelhandgranate M1913/15 Poppenberg system would be suitable as a compact trench club without much modification – just making sure to remove the 45g explosive charge first.

Retrieved from "https://battlefield.fandom.com/wiki/Dud_Club_(Codex_Entry)?oldid=343231"
Community content is available under CC-BY-SA unless otherwise noted.