Battlefield Wiki
Register
Don't have an account?
Sign In
Advertisement
in: Standard, Construction, DICE, Developers of the Battlefield series
English

EA Digital Illusions Creative Entertainment, known more commonly as EA DICE or just DICE, is a video game developer stationed in Stockholm, Sweden and owned by Electronic Arts. It is known for the development of the critically acclaimed Battlefield series.

DICE was founded by Fredrik Liljegren and Andreas Axelsson in Alvesta, Sweden, in 1988. Most of the early games they developed were small games such as Pinball. In 2000, DICE bought Refraction Games, the company that produced Codename Eagle, and used the game as inspiration for the Battlefield series.

On September 1, 2004, DICE bought Trauma Studios, the developer of a popular Persian Gulf War-themed Battlefield 1942 mod called Desert Combat. Trauma Studios co-developed Battlefield 2 with DICE, but was then shut down on June 7, 2005, a few days before the game's release.

Electronic Arts served as DICE's publisher for the Battlefield games since Battlefield 1942. With Battlefield becoming one their most successful franchises on PC, Electronic Arts began attempting to acquire DICE in 2004, but was met with resistance from some of studio's shareholders at the time. The two companies came to an agreement in 2006, and on October 2 it was announced that EA had fully acquired DICE and that it would become an integrated EA studio. The two companies merged and DICE's 2.6 million shares were paid out to shareholders at SEK 67.50 a share on October 16. DICE CEO Patrick Soderlund became an EA Studio General Manager and stated that "Being part of the EA studio team is a great step forward that will help us continue to deliver new games and new franchises to DICE fans. We've been working very closely with EA for the past five years and this is a very natural step for us as we move into the next-generation of gaming."[1]

A few days after the acquisition, the Canadian extension of DICE, DICE Canada, was shut down. DICE Canada was based off London, Ontario and worked on booster packs and patches for the Battlefield games.

On May 15, 2013, Electronic Arts opened an American extension of DICE, known as DICE Los Angeles (or DICE LA for short).

The official DICE logo used for most of the Battlefield games prior to Battlefield: Bad Company.

The DICE Dog Tag from Battlefield 3.

The DICE Dog Tag from Battlefield 4. 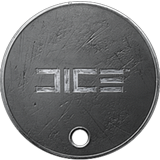 The DICE Dog Tag from Battlefield 1. 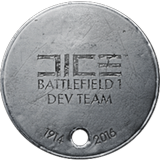 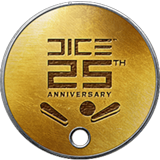