The EA Gun Club was a website created by Electronic Arts. Its purpose was for gamers to complete challenges, acquire badges, and receive rewards in specific EA games. The site also allowed users to chat with friends and receive news on new EA shooter games.

EA slowly transitioned Gun Club out due to inactivity on the site and eventually closed it down on April 29, 2013. The site was eventually redirected into Battlelog.

The website previously had challenges, badges, and rewards for seven known EA games:

The website rewarded users with badges and weapon unlockables for completing various tasks.

These were earned by completing specific tasks related to the games mentioned above. Tasks included simply registering on the site, getting a certain amount of kills with a certain weapon, etc. There were 48 badges available to unlock. 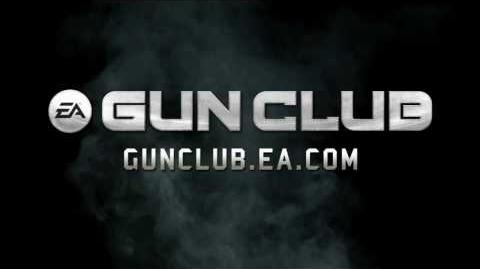 EA Gun Club Trailer
Add a photo to this gallery

Retrieved from "https://battlefield.fandom.com/wiki/EA_Gun_Club?oldid=292616"
Community content is available under CC-BY-SA unless otherwise noted.