The EBRC Jaguar is a six-wheeled armored reconnaissance and combat vehicle, set to enter service with the French and Belgian militaries beginning in 2020. It has a 3 man crew - driver, gunner, and commander. It sports a wide variety of weapons, including a 40mm main cannon, ATGMs, a 7.62mm pintle-mounted machine gun, and various countermeasures such as a smokescreen, air conditioning, armor protecting against small arms, and an extensive anti-overpressure system.

Can be called in

The EBAA Wildcat is an infantry fighting vehicle that can be specialized to an anti-aircraft role, and appears in Battlefield 2042.

The driver operates a primary weapon of moderate caliber, guided missile system, and defensive equipment. A remote weapon system gunner operates weaponry chosen by the driver such as an HMG, 40mm grenade launcher, minigun, or barrage missile launcher. A second gunner operates a range of weapon pods. The many weapons systems on the turret can cause issues with visibility of threats.

The spotter can use a Sensor Array to spot targets for the gunners, and Detection Pulse to detect nearby infantry. The spotter's equipment is placed on a post, giving a vantage point above the weapon stations.

A glimpse of the in the Battlefield Portal trailer, seen on the right 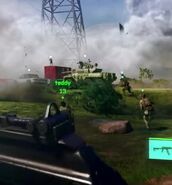