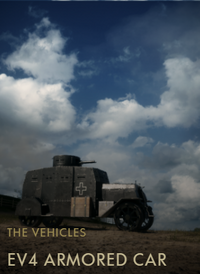 Once the German Army had witnessed the effectiveness of the Belgian Armored cars at the beginning of the war, they decided to produce their own. These first designs were first sent to the Baltics, and then on the Western Front. Once there, their mobility was challenged by the terrain, and they were sent off to the Eastern Front in Russia in where their mobility was more effective.

This car could reach a top speed of 60km/h and was mostly armed with 3 machine guns.

Retrieved from "https://battlefield.fandom.com/wiki/EV4_Armored_Car_(Codex_Entry)?oldid=343295"
Community content is available under CC-BY-SA unless otherwise noted.