Eastern Front is a Codex Entry featured in Battlefield 1, introduced in the Battlefield 1: In the Name of the Tsar expansion. It is unlocked upon winning a round on Galicia. 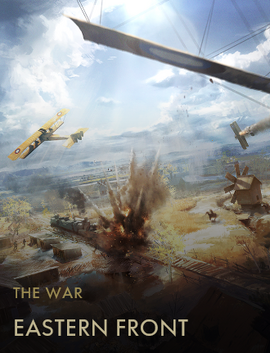 The Eastern Front differed in many ways from the battlefields and no-man´s lands of France and Belgium. It was separated into a northern front in Poland and the Baltics, where the Russian army faced the well-equipped and confidently led Germans, and a southern front, where it clashed with the multicultural armies of the Austro-Hungarian Empire in the sector that would become known as the Galician Graveyard, where hundreds of thousands of men perished in the bloody struggle for control. Although a stalemate like that on the Western Front never fully emerged in the East - mostly due to the vast land area - local strongholds, deep trench-systems, and fortified positions still dotted the landscape. While the offensives of the Western Front were often confined to relatively small stretches of land, villages, or salients, the war on the Eastern Front usually stretched over hundreds of miles on end, with squadrons of cavalry, divisions of infantry, and armored cars roaming the countryside. Large scale attacks like those of Gorlice-Tarnow (1915) or the Brusilov Offensive (1916) penetrated 50 to 60 miles into the enemy's lines, causing casualties in the millions without bringing an end to the war. Huge armies were maneuvered in flanking and breakthrough attempts or in diversionary attacks all along the hundreds of miles of frontline. The east was the place where shock-troop tactics and shock-bombardments emerged, where whole cities and fortresses were lost and recaptured, and where the terrain determined the fighting. There were deep forests, dangerous swamps, and high mountains in some areas, while mighty rivers and vast open plains dominated others. The winters were harsh and unforgiving, the spring brought the thaw, the floods, and the mud, and in summer, the dust of the sandy soil hung in the air. Infrastructure and a functioning supply system were of primary importance because of the enormous distances, and pioneers on both sides worked tirelessly to keep the railways and roads operational. Over three million soldiers died in the fighting on the Eastern Front, with an estimated 9 million men wounded. The civilian death toll, although impossible to accurately determine, was at least as high, even before the eruption of the Russian Civil War, as millions of peasants became the victims of advancing and retreating armies.

Retrieved from "https://battlefield.fandom.com/wiki/Eastern_Front_(Codex_Entry)?oldid=343348"
Community content is available under CC-BY-SA unless otherwise noted.