The Elco 80 is a variant of a PT Boat used during World War II. A PT boat were variety of motor torpedo boats (hence the name Patrol Boat or "PT") it was a small, fast vessel used by the United States Navy in World War II to attack larger surface ships, the squadrons who used the PT boats were nicknamed "the mosquito fleet" with the Japanese calling them the "Devil Boats". 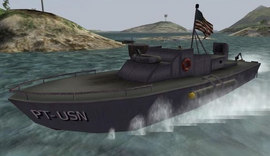 The Elco 80 is a vehicle featured in Battlefield 1942 exclusively on the map Invasion of the Philippines for the USMC.

It has two passengers the driver, who has the ability to fire torpedoes and mines. The Torpedo can do some damage against Destroyers and other ships, while the Mines can secure a waterway. The second passenger is armed with dual M1919 machine guns, similar to the one from B-17.

Raft for the Elco 80 after it sinks front.

Rear of the raft

The Elco 80 appears in Battlefield Vietnam World War II Mod in Invasion of the Philippines for the United States Marine Corps.