Battlefield Wiki
Register
Don't have an account?
Sign In
Advertisement
in: Standard, Commander resources, Weapons of Battlefield 2142,
and 3 more

An Electromagnetic Pulse, or EMP, is a burst of electromagnetic radiation that results from an explosion (usually from the detonation of a nuclear weapon, but conventional-explosive-based and even non-explosive systems are possible as well) and/or a suddenly fluctuating magnetic field. The resulting rapidly changing electric fields or magnetic fields may couple with electrical/electronic systems to produce damaging current and surges, which make any technological devices useless.

During the 22nd century, man relies on technology more than ever before, which has also altered the face of warfare. In order to combat high tech weaponry, the use of EMP devices has become invaluable.

By the outbreak of The Cold War, numerous EMP devices existed that helped to change the outcome of conflicts. Both the EU and PAC have EMP equipped weaponry mounted on satellite weapon platforms in the atmosphere that, with just two rounds, can disable any electronic device or vehicle in the vicinity until the device/vehicle can activate its 'fail-safe', which have been implemented in the face of EMP warfare.

EMP weapons in Battlefield 2142 cause a number of effects on target electronics/vehicles. Upon the release of the EMP, any nearby vehicle will become instantly disabled. This causes the vehicle to activate a form of 'fail-safe' that allows the vehicle to reactivate. The fail-safe does not come into play for about 2–3 seconds. At first, the vehicle will regain control of acceleration and direction (in the case of Tanks, APCs and Battle Walkers) and after another 2–3 seconds turret/upper section traversal will be re-engaged.

Throughout this, and for several seconds afterwards, the HUD of the vehicle will distort and flash. All of these effects leave the vehicle unable to engage any enemies effectively for almost 10 seconds, giving the enemy a brief upper hand. Continued use of EMP devices on the vehicle are also used to render it 'disabled' and force the driver out, allowing the enemy to engage and kill him. This method also allows the enemy to steal the vehicle.

EMPs can also be effective, to an extent, against infantry. All infantry are equipped with NetBat Helmets that use electronic visors to aid the soldier in his vision and combat awareness. This HUD becomes distorted and blurry when subjected to an EMP, giving enemy infantry and armour the upper hand against the affected.

In commander mode, once used, this EMP Strike has a cooldown period of 2 minutes to use again.

The Scalar Weapon is an EMP device featured in the singleplayer campaign of Battlefield: Bad Company 2. It was first invented by the Japanese in 1944. It created a powerful electromagnetic pulse that can destroy a power grid. Due to its enormous size, it must be transported by the second largest cargo plane in the world, the Antonov An-124 Ruslan .

An EMP blast occurs towards the end of Shanghai. The EMP disables the cities electronics and causes a Chinese WZ-9 helicopter to crash near the boat Irish and the squad are riding.

In the succeeding mission, South China Sea, it is revealed that the EMP blast knocked out the electronics of the nearby US Navy ships, but the USS Titan was unaffected as it was outside of the blast radius.

The ships lost the ability to navigate and attack using their electronics, but the diesel engines remained active as they were unaffected by the EMP. The player can hear a conversation between two crew members about how diesel engines are unaffected as they have no spark plugs.

An EMP is available as a commander resource in Battlefield 4, as the EMP UAV. 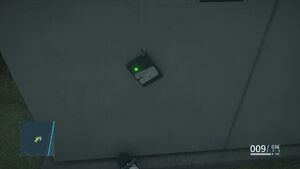 An EMP appears in the singleplayer campaign of Battlefield Hardline in Glass Houses. Developed by Marcus Boone for Khai Minh Dao, it was used to cut the power in Neil Roark's compound in Los Angeles, allowing Khai and Nicholas Mendoza to infiltrate it in order to potentially bug it and learn of Julian Dawes' expansion to the west and the deal being made with Roark.