The Elite Automatico M1918 is a Codex Entry featured in Battlefield 1. It was introduced on February 14th, 2017 in the Winter Update alongside eight other Elite Codex Entries. It is unlocked upon obtaining 500 kills with the Automatico M1918 and awards 25000 XP. 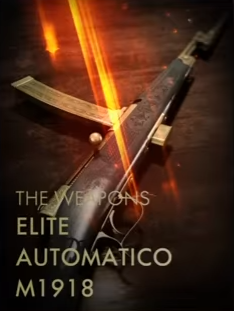 The Italian army was arguably the first in the world to mass-deploy a sub-machine gun-type weapon, with the double-barreled Villar Perosa M15. The weapon was initially intended to be used in aircraft and was essentially two 9mm machine guns mounted together, but instead the VP was issued to ground troops in 1915. With its 2 x 1,500rpm it could be a devastating weapon in the right conditions, and by the end of the war over 14,000 VP's had been produced. But the violent rate of fire, and the lack of a normal trigger and grips also made the Villar Perosa an awkward infantry weapon. The Arditi had integrated the VP into their assault tactics, and made modifications and special mounts to make the weapon more usable, including mounting it in crude rifle stocks. But not long after the introduction and successes of the VP, the Italian military began requesting a more conventional assault weapon.

A first attempt was made at the end of 1916, when the original manufacturer of the Villar Perosa developed two prototypes of a new weapon, the OVP. It was based on one of the two guns making up the VP, mounted in a more traditional rifle stock with a trigger mechanism. The other two prototypes were demonstrated in 1917, and 500 OVP's were ordered, but it seems they were finished after WWI.

Another weapon based on the same concept of splitting the VP in half, was designed by the young engineer Tullio Marengoni. His company had previously been contracted to produce a large amount of the VP M15's, so the machinery and many parts were available. Like the OVP, Marengoni's weapon retained the Villar Perosa's basic action and 25-round top-mounted magazine, and the receiver was fitted to a wooden stock repurposed from old Vetterli rifles. It was equipped with a folding bayonet, and the fire rate was a somewhat less hysterical 900rpm. This weapon was adopted by Italy as the "Moschetto Automatico Modello 1918" and issued to the Arditi in the last year of the war. A few thousand of the Modello 1918 are supposed to have been produced, but the details around its deployment are debated. Some sources say the Modello 1918 first saw action in March 1918, around the same time as the German MP18, making them the first true sub-machine guns.

Retrieved from "https://battlefield.fandom.com/wiki/Elite_Automatico_M1918_(Codex_Entry)?oldid=343496"
Community content is available under CC-BY-SA unless otherwise noted.