The Elite Gewehr M.95 is a Codex Entry featured in Battlefield 1. It was introduced on February 14th, 2017 in the Winter Update alongside eight other Elite Codex Entries. It is unlocked upon obtaining 500 kills with the Gewehr M.95 and awards 25000 XP. 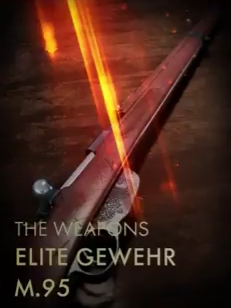 The popular Italian song "Ta-Pum" has become synonymous with the Austrian Gewehr M.95, which was the primary rifle opposing the Italians in WW1. The origins of the song are unclear, but it is claimed to have been origianlly sung by miners during the construction of the San Gottard pass through the Swiss Alps in the 1870s, with the name "Ta-Pum" being an onomatopoeic reference to the sound of explosives. The song was adopted and modified by Italian soldiers in the war, for them the song representing the sound of Austrian artillery and the gunshots from their M.95's. Because of the echoes from the mountain ranges, the bullet noise is said to have arrived; "ta", followed by the gunshot itself: "pum". It is arguably in WW1 that "Ta-Pum" really became popularized. Soldiers on all side and fronts relied on the song to help control the mix of fear, terror and boredom that they faced, and "Ta-Pum" is no exception, with a section of a common version going:

"Here there are battalions of the dead

But in Milan, how many shirkers...' As soon as they bring up our bread 'The snipers began to fire"

There were and are a huge number of versions of the song, but every verse was interspersed with the refrain "ta-pum, ta-pum", repeated. The author of the WW1 version of the song is said to be composer Nino Piccinelli, who was an Arditi shock trooper in the war and wrote the song in 1915 on the night before the attack. After the war Piccinelli described that night in an interview: "Our trench was only a few dozen meters from the Austrians. I gave them a note to every breath of my soul, thus was born the heartfelt and desperate song, between the gloomy duels of artillery, the ghostly gleam of the rockets, the groans of the wounded, the unerring shots by snipers." Today there are over 1200 recordings of "Ta-Pum", including Gregorian chants for the Vatican. A few years ago, the Italian town of Chiari, the birth town of Nino Piccinelli, decided to name a street in the composer's honor.

Retrieved from "https://battlefield.fandom.com/wiki/Elite_Gewehr_M.95_(Codex_Entry)?oldid=343197"
Community content is available under CC-BY-SA unless otherwise noted.