Elite Infiltrator is a Codex Entry featured in Battlefield 1, introduced in the Turning Tides expansion. It is unlocked upon obtaining 10 kills with the Infiltrator elite kit. 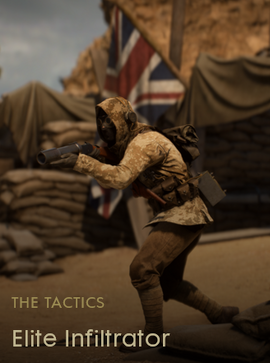 Combat patrols crept through no-man’s land in the dark before an attack, snipers moved unseen through the night in the search of the perfect lair, and forward artillery observers hid alone in ruins close to the frontline with just binoculars and a radio transmitter. All these specialized infiltrators gathered information, searched for targets, or directed artillery barrages against the enemy. Working alone or in small groups, they influenced the outcome of huge offensives with their personal actions, and as the war developed, so to did the coordinated tactics of artillery and infantry, and the creeping barrage- when infantry went over the top under cover of a timed artillery barrage that kept the enemy in his trenches- became the order of the day.

Retrieved from "https://battlefield.fandom.com/wiki/Elite_Infiltrator_(Codex_Entry)?oldid=343373"
Community content is available under CC-BY-SA unless otherwise noted.