The Elite M1907 SL is a Codex Entry featured in Battlefield 1. It was introduced on February 14th, 2017 in the Winter Update alongside eight other Elite Codex Entries. It is unlocked upon obtaining 500 kills with the M1907 SL. 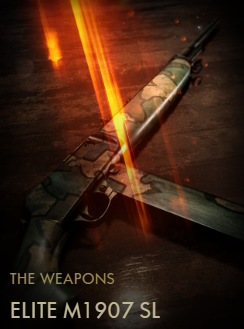 The American family of self-loading rifles that started with the Model 1903 would become one of the most commercially successful lines of semi-automatic rifles of the early 20th century. In total about 126,000 of the different self-loader models would be produced, including the M1907 and M1910, all operating with the same semi-automatic mechanism. The M1907 was also one of the earliest and most widely adopted semi-automatic rifles in WW1. Early in the war, before machine guns were mounted to aircraft, airmen would bring self-loading rifles into planes, balloons and airships, and the M1907 and its sibling were some of the most numerous in this role. Already when the war broke out in 1914, the French authorities requisitioned existing self-loading rifles from gun manufacturers, including M1907's and issued these to French aircraft from August. The need for semi-automatic rifles grew, and between 1915 and 1918, France purchased 3,300 M1907's from the US manufacturer, and a few hundred M1910's - which is the rifle the famous pilot Roland Garros is said to have carried.

The British and Russian Empires also purchased a few hundred M1907's and M1910's early in the war, the British issuing them to the Royal Flying Corps. The M1907 rifles intended for aircraft were fitted with extended 15- or 20-round magazines and a casing collector bag.

According to the US manufacturers records, the majority of the M1907 self-loaders ordered by France were to be used in trench warfare, and were fitted with the 15 or 20-round magazines, bayonets, and a large number were factory altered for select-fire capability with fully automatic fire of up to 700rpm. From 1917 French troops used the M1907 for assaults and trench-clearing, making it probably the first ever true assault rifle to enter service.

Retrieved from "https://battlefield.fandom.com/wiki/Elite_M1907_SL_(Codex_Entry)?oldid=343195"
Community content is available under CC-BY-SA unless otherwise noted.