The Elite M1909 Benet Mercie is a Codex Entry featured in Battlefield 1. It was introduced on February 14th, 2017 in the Winter Update alongside eight other Elite Codex Entries. It is unlocked upon obtaining 500 kills with the M1909 Benét-Mercié 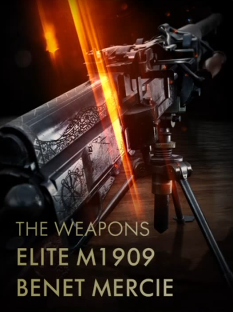 The M1909 light machine gun was adopted by the USA as the "Benet-Mercie Machine Rifle", and saw action with the US troops for the first time in 1916 during the Mexican recolutionary Pancho Villa's attacks on US border towns, and the US military operation launched in retaliation, 9 March 1916, Pancho Villa and his hundreds of men attacked Columbus, New Mexico, and the US Army post there. Several Benet-Mercie's were deployed in the defense and inflicted considerable losses on Villa's soldiers, firing over 5,000 rounds each, although one of them jammed right after being set up. During the following fighting in the Mexican Expedition the Benet-Mercie got a reputation for unreliability and breakages. One problem was that the ammunition clips could be loaded upside down and cause jamming, which was a particular problem at night, leading to US troops scornfully dubbing it the "daylight gun". Later it has been generally accepted that many of these failures and problems were caused by inadequate training of the gun crews.

The M1909 also served with the French Army through WW1, under the name of "mitrailleuse portative modete 1908/13", chambered for the standard Lebel cartridge. It was developed in 1907 as a light infantry or cavalry support weapon, but at that time France did not yet have a clear doctrine on automatic weapon use, and the nation's leaders could not agree to adopt it large scale, leading to it only being produced and adopted in limited numbers before the war. The mistake of not producing more machine guns became clear in 1914, and a huge number were suddenly needed. But not enough M1909's could be manufactured to meet demand, because it was a finely made weapon that was complicated and expensive to produce. Instead the much cruder and cheaper Chauchat was to become the main French LMG. The M1909 would however continue to be used in armored cars, airships and British and French tanks. The Belgians had equipped units of bicycle cavalry with the M1909, which were used with devastating effect against the German cavalry in August 1914. It was also deployed as an airplane weapon, and on 5 October 1914 the M1909 was used by French airman Frantz and Quenault to score the first aerial combat victory in history. The British cavalry adopted the .303 version in 1916, and fought dismounted with it, and overall the British made the most use of the weapon. The M1909 LMG was a great export success, and for many of the armies that adopted it, the M1909 was their first taste of light machine guns.

Retrieved from "https://battlefield.fandom.com/wiki/Elite_M1909_Benet_Mercie_(Codex_Entry)?oldid=356771"
Community content is available under CC-BY-SA unless otherwise noted.