Elite M1911 is a Codex Entry featured in Battlefield 1. It is unlocked upon obtaining 500 kills with the M1911. 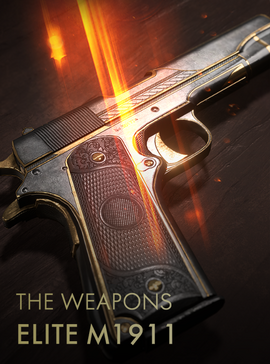 The baptism of fire for the M1911 was WW1, where the pistol shaped legends; like when Sergeant Alvin York took 132 German prisoners using his pistol, and when ace pilot Frank Luke used his M1911 in a desperate last stand after being forced down behind German lines. Both received the Medal of Honor (Luke posthumously), but there were at least 14 Medal of Honor citations in WW1 where the M1911 played a key part.

Two days into the American Meuse-Argonne offensive, on 28 September 1918, First Lieutenant Dwite H. Schaffner was leading his men under heavy enemy fire in an attack on a ridge called St. Huberts Pavilion. After capturing the ridge, Schaffner's company was taking heavy casualties from a machine gun, but he located the MG position and personally disabled its crew. Schaffner's bravery inspired his men, and they managed to hold against two counterattacks. When the Germans attacked a third time, Schaffner charged them and killed several with his M1911 pistol and grenades. He then spotted the German captain leading the charge, mortally wounded him and dragged the officer back to the company's trench by the collar. Schaffner interrogated the captain and gained valuable information about the German strength and position - allowing his company to hold the position for five more hours despite being surrounded on three sides.

On 8 October 1918, two US companies were pinned down by an enemy machine gun nest in Bois-de-Consenvoye. Second Lieutenant Patrick Regan divided a group of volunteers into three automatic rifle teams, sending two to each flank and Regan himself leading the third team in a frontal assault on the enemy position. Several of the volunteers were killed or wounded outright. Despite Regan too getting severely wounded, he pulled his M1911 pistol and leapt straight into the MG nest, screaming at the crew to surrender and taking 30 Austrians prisoner. Later Regan was ordered to report to a first-aid station, at which point he realized his pistol had been empty all along.

First Lieutenant Samuel Woodfill and his company were advancing through thick fog near Cunel, on the morning of 12 October 1918, when machine gun fire opened up on them. Woodfill charged the MG position alone while the rest of the company took cover, and as he was getting close he opened fire and killed three Germans. A German officer charged him at close range, but Woodfill overpowered and killed him too. He then signaled to his men to advance and they soon disabled a second MG position and took prisoners. When a third machine gun opened fire, Woodfill ordered another attack and was the first to reach it and jump into the bunker pit. He fired his M1911 at two enemy soldiers but missed all shots, instead grabbing a nearby pick axe and bludgeoning them to death. General John Pershing, US Commander-in-Chief, would later call Woodfill the most outstanding American soldier of WW1.

Private Thomas C. Neibaur was an automatic rifleman using the French Chauchat, whose battalion managed to capture an important hill along the strong Kreimhilde line on 16 October 1918. Neibaur’s squad then volunteered to flank and neutralize a network of enemy machine guns in the vicinity, but his two squad members were killed and Neibaur himself was wounded in the legs. About 50 Germans attacked Neibaur's position, but he shot most of them with his Chauchat. Severely wounded, Neibaur tried to get back to American lines but fell unconscious, only to wake up and find himself captured by about 15 Germans. He discovered his M1911 pistol on the ground nearby and crawled towards it while some of the Germans charged him with bayonets, but Neibaur shot them, captured eleven German prisoners and led them back to American lines.

Retrieved from "https://battlefield.fandom.com/wiki/Elite_M1911_(Codex_Entry)?oldid=356614"
Community content is available under CC-BY-SA unless otherwise noted.