Elite MP18 is a Codex Entry featured in Battlefield 1. It is unlocked upon obtaining 500 kills with the MP18. 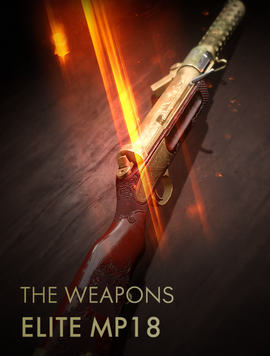 The Sub-machine Gun concept originated in WW1 alongside the modern infiltration tactics developed by storm troopers, with the Italian Arditi being first to adopt the twin-barreled Villar-Perosa SMG in 1915. The same year, the German Rifle Testing Commission listed requirements for a specialized trench combat weapon; it had to be of simple and inexpensive design, light, fully automatic and firing the 9mm Parabellum round. Initially the Commission attempted to convert the Lange Pistole 08 to full-auto fire, but the light weight and excessive fire rate made it uncontrollable. Hugo Schmeisser - the son of Louis Schmeisser, who in the 1890s had designed blowback operated pistols - began developing his father's design into a larger weapon system for fully automatic fire in 1916. Prototypes of Schmeisser's Machine Pistol were submitted for testing and evaluation, where its revolutionary open bolt blowback mechanism proved to be extremely durable. It was a sturdy weapon featuring a conventional rifle stock, and fittings and finish of near commercial grade. The receiver was made of thick tube, and the bolt was machined from a single block of steel - the entire gun consisting of only 34 parts. The initial prototypes used 20 round box magazines, but the Testing Commission insisted on adoption of the 32 round Trommelmagazin, as it was already widely used for the P08.

In early 1918, Schmeisser's weapon was finally adopted as the “Maschinenpistole 18, I” and 50,000 were immediately ordered for the upcoming Kaiserschlacht offensive, where the MP 18 became the preferred weapon of the Sturmtruppen and proved itself ideal for fire and movement tactics. It was called “Grabenfeger” (trench broom) and “Kugelspritze” (bullet hose) by the German troops. In combat the Trommelmagazin would turn out to be one of the main weaknesses of the MP 18, as it was complicated and had difficulty coping with the rate of fire, but overall the weapon performed well. Heinrich Vollmer designed an experimental magazine for the MP 18 with a 60 round spool magazine carried on the soldiers hip, connected to the weapon by a flexible hose.

The MP 18 could not be produced in the intended numbers, with at least 30,000 of the weapons believed to have been made by the time of the Armistice, but only about 10,000 of those reaching the frontline. During the Battle of the Selle on 17 October 1918, the 1st Battalion King's Shropshire Light Infantry captured an MP 18 from the German defenders - the booty getting marked on the stock and residing in a British museum today. The French too captured many MP 18's during their final offensives and began to study them, leading directly to the development of several inter war Sub-machine Guns like the MAS 1924. Confiscated stocks of MP 18's were issued to French soldiers after WW1, and France even developed their own extended magazines for them.

The impact of the MP 18 on the Allies was evident by the Versailles treaty specifically limiting the number of SMGs that Germany was allowed to build and possess, including a few hundred MP 18's for the German police. These were converted back to using the original 20 round magazines, which were then patented by Schmeisser and marked with his name. These magazines would later be used in German SMG's like the MP 40, which is widely believed to be the reason why Hugo Schmeisser is often incorrectly believed to be the designer of the MP 40, while ironically being largely forgotten for actually creating the revolutionary MP 18. The weapon kept on being used by the paramilitary Freikorps, and in 1922 an MP 18 was used to assassinate the Foreign Minister of the Weimar Republic, Walther Rathenau. Germany would not issue another SMG until the MP 38, but the MP 18 stayed in limited use with the German army through WW2. The MP 18's open bolt blowback mechanism became the foundation for virtually every SMG to follow for the next 50 years; like the British Lanchester, the Soviet PPD and the Finnish Suomi.

Retrieved from "https://battlefield.fandom.com/wiki/Elite_MP18_(Codex_Entry)?oldid=343553"
Community content is available under CC-BY-SA unless otherwise noted.