The Elite Madsen MG is a Codex Entry featured in Battlefield 1. It was introduced on February 14th, 2017 in the Winter Update alongside eight other Elite Codex Entries. It is unlocked upon obtaining 500 kills with the Madsen MG. 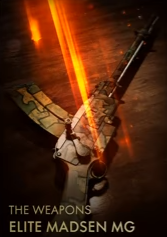 In Feburary 1904, war broke out between the empires of Russia and Japan over rival ambitions in Manchuria and Korea. The Russo-Japanese war would in many ways be a preminition of The First World War a decade later, with both sides using trenches, barbed wire, modern artillery, and the relatively new heavy machine guns in increasing number over the course of the one and half year-long war. Both Russia and Japan also ordered the brand new Danish M1902 Madsen, which was a pretty much unique light machine gun at the time, but Japan received it only after the 1904-1905 war. Russia purchased about 1,200 of the Madsen's, but only a few hundred arrived before the war ended. The exact numbers are unclear, partially because Denmark was a neutral state and thereforenot allowed to sell arms to the warring parties, so the deals were kept secret and delivered through complex detours. Many of the Madsen's that arrived to Russia during the war were issued to the Cossack cavalry in Manchuria. In 1905 four of the LMG's are said to have repelled a Japanese attack, with one of the guns having fired 27,000 rounds alone. Still, the war ended with total victory for Japan in September 1905.

Every major world power had closely observed the course of the Russo-Japanese war and all its modern weaponry, and the performance of the Madsen would become the inspiration for the French M1909 LMG. In Russia, the defeat led to revolts and revolution attempts, and the Madsen was used by Russian troops to suppress the riots. The Tsar finally made limited reforms of the Duma, and to the military, which would allow it to challenge the Austrians and Germans in WW1. But the social problems remained unaddressed, and the seeds for the 1917 Russian Revolution had been planted.

The Madsen would go on the [sic] see action with a multitude of nations in WW1. German purchased 5,000 of them, which would first be issued to "Musketen Batallione", some of which fought at the Battle of Somme in 1916. When new weapons like the LMG 08/15 arrived, the Germans re-issued their remaining Madsen's to mountain troops and storm troopers.

Retrieved from "https://battlefield.fandom.com/wiki/Elite_Madsen_MG_(Codex_Entry)?oldid=369022"
Community content is available under CC-BY-SA unless otherwise noted.