The Elite SMLE MKIII is a Codex Entry featured in Battlefield 1. It was introduced on February 14th, 2017 in the Winter Update alongside eight other Elite Codex Entries. It is unlocked upon obtaining 500 kills with the SMLE MKIII. 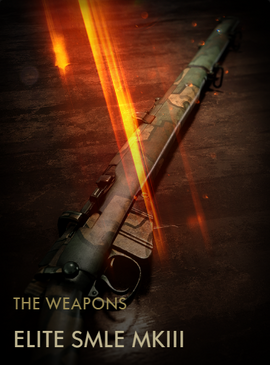 With its relatively short length, the British SMLE rifle turned out to be well suited for trench warfare and went on to serve from 1895 all through the 20th century, with a total estimated production of over 17 million rifles. But ironically, the SMLE is a weapon that almost got replaced before it had time to prove its worth. During the Second Boer War of 1899-1902 the British came up against accurate long-range fire from rifles firing the revolutionary German 7×57mm round, a smaller high-velocity round that outperformed the British cartridges. Because of this the British developed an equivalent cartridge in 1910, and to fire it they developed a rifle based on a modified German G98 action, which would be called the Pattern 1913. Intended to replace the SMLE, the P13 was not ready for mass production when WW1 broke out, and it would have been a huge logistical risk to introduce a new rifle and cartridge in war time. So, the British marched into WW1 with the SMLE, and it would remain their primary rifle.

The British Empire still could not produce enough of the SMLE’s, however, so they contracted US manufacturers to produce a further development of the Pattern 13 – the Pattern 14. It served as a sniper rifle, second line- and reserve issue rifle for the British in WW1. When USA entered the war in 1917 the P14 was modified by the US Ordnance Department into the Model 1917, chambered for the standard US .30-06 cartridge and easily produced in the factories already geared up for the P14. The US M1917 was intended as a complement to their M1903 rifle, but actually the M1917 far surpassed it in production and usage during the war.

The SMLE was renowned for its fast bolt-action, and well-trained British troops could fire 20 to 30 aimed rounds per minute. At Mons in August 1914 the British soldiers were waiting for the Germans, dug-in and outnumbered 3:1. The Germans approached, advancing in close order, and at about 1,000m the British opened fire with their SMLE’s. At just under 200m they switched to “rapid fire”, obliterating the German lines, and making some of them think the volume of fire must have come from machine guns. The British losses at Mons were about 1,700 men, against the German losses of about 5,000. The battle became legend, and spawned the myth of the Angels of Mons.

Retrieved from "https://battlefield.fandom.com/wiki/Elite_SMLE_MKIII_(Codex_Entry)?oldid=343198"
Community content is available under CC-BY-SA unless otherwise noted.