"The Enforcer is still a bad-ass. Capable close range shotguns and long range battle rifles, along with the ability to provide ammunition to teammates and shield them from damage are powerful abilities. In addition, he’s got the every-popular Breaching Charge which allows him some tactical flexibility and brings a great deal of appeal to the class."

Enforcer is a kit featured in Battlefield Hardline. While similar to the Support kit from previous installments, battle rifles and shotguns are now exclusive to the class, as well as the higher-caliber semi-automatic pistols. Unlike the Support kit, the Enforcer does not have access to Light Machine Guns as they are now Battle Pickups for balancing purposes.

The weaponry available to the Enforcer can lead to two very different playstyles. The shotguns, on one hand, caters to a run-and-gun close-quarters playstyle in which players can kill enemies with one shot (for the most part) at close range with the shotguns. The battle rifles, on the other hand, caters to a more longer-range playstyle as they use larger-caliber rounds compared to the assault rifles and carbines, which gives them more damage, but also more recoil and less rounds in a magazine and makes them less reliable at close-range.

The Enforcer kit has access to the Ammo Box to give ammo to himself and his teammates. Alongside that, teammates also have the ability to replenish a few magazines for their primary and secondary weapons by pressing the Action button beside an Enforcer with an ammo box.

As well, the Enforcer has access to Breaching Charges to use for blowing up walls, setting traps on the road to destroy incoming vehicles, or using sticking them on vehicles to destroy them instantly.

Finally, the Enforcer has exclusive access to the Ballistic Shield, which is useful for blocking bullets being fired towards them and pushing forward towards the enemy. If the player has it equipped, but is not using it to protect them in the front, it is placed on their back in which it will block bullets from hitting the player's back.

A Law Enforcement Enforcer (from the SWAT subfaction) holding the M240B. 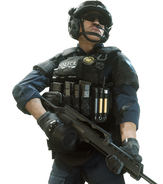 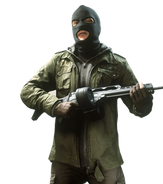