Battlefield Wiki
Register
Don't have an account?
Sign In
Advertisement
in: Standard, Section stubs, Kits of Battlefield,
and 11 more
English

The Engineer class is one of the playable kits featured in most installments of the Battlefield Series. It is usually intended to repair friendly vehicles and combat enemy vehicles. They are armed differently in each installment but are typically most effective at close to mid range with shotguns and carbines, the exception being the rifle-armed engineer of Battlefield 1942.

They often use either anti-tank mines or anti-tank rocket/missile launchers for anti-armor purposes, and a repair tool, blowtorch, or wrench to repair their vehicles.

The Engineer in Battlefield 1942 differs from all the other iterations in their primary armament. They are equipped with non-scoped bolt-action rifles or a semi-automatic rifle (in the case of the USMC and Japanese), making them more suited for long-range combat than the other kits (bar the Scout kit). They are also armed with landmines and ExpPacks for destroying enemy vehicles, and the wrench tool for repairing friendly vehicles, as well as the basic weapons issued to all kits (a handgun and a combat knife).

In Battlefield 1942: Secret Weapons of WWII, the Engineer kit is altered for certain factions. The British Commandos Engineer is issued a Shotgun, and the German Elite Forces kit is given rifle grenades instead of ExpPacks.

The North Vietnamese/Viet Cong Engineers use submachine guns as primary weapons, and the rest of their equipment include Wrench, landmines, mortars, booby traps, blowtorches and Pungi Sticks. In addition, they come equipped with a shovel, which is used to transport tunnels, special movable spawn points.

M67 Hand Grenade
"Specialist equipped to repair vehicles as well as destroy them."

The Engineer kit is a playable kit in Battlefield 2. With the exception of the tier 2 unlock, all engineer primary weapons are shotguns. Each Engineer is also equipped with a faction-specific handgun and a combat knife, as well as grenades. They are vehicle-centric (much like the Anti-Tank kit), but have an inverted focus -- instead of being focused toward destruction of enemy vehicles, the engineer is more focused on the support and maintenance of friendly vehicles.

The only kit armed with shotguns, the Engineer is capable of doing heavy damage against one or more infantry at close range, but is, between the spread and the relatively low damage-per-pellet, effectively harmless outside of that range. Their handgun can make up for distance, with much lower spread, but the handguns possess low enough damage such that they are ineffectual as dedicated primary weapons.

The first of the engineer's two unique gadgets is the wrench. This device has three functions -- firstly, it is capable of fixing both friendly and neutral vehicles. Secondly, the wrench can be used to repair bridges which have been damaged by explosives. Thirdly, the wrench is the only means by which anti-tank mines may be removed from the map besides running over them and detonating them directly.

The second unique gadget employed by the Engineer are a set of anti-tank mines. Unlike the Anti-Tank kit's AT launcher, the mines are defensive, placed weapons, which will deal heavy damage to any enemy vehicle that runs over them. Once placed, they can only be removed by the wrench, as mentioned above -- they cannot be manually detonated. 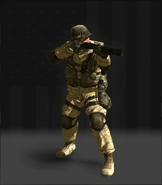 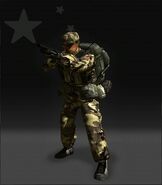 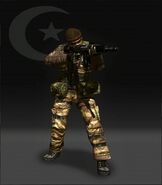 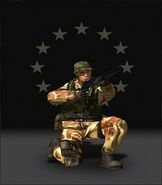 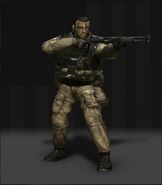 The US Navy SEAL Engineer. 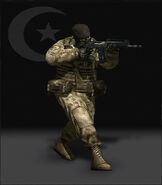 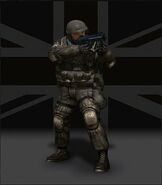 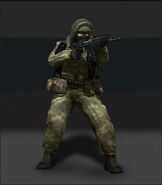 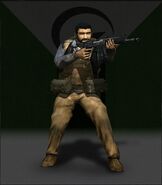 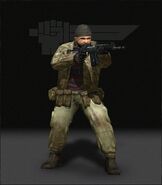 SMAW (USMC)
Carl Gustav M2 (EU)
PF-98 (PLA)
RPG-7V (MEC)
"The engineer can fix vehicles with his blowtorch. He can also kill enemies with it. In addition, the engineer carries a shotgun, pistol, rocket launcher, and anti-vehicle mines. The mines are not sensitive enough to be detonated by foot soldiers."

The Engineer in Battlefield 2: Modern Combat received slight changes from its Battlefield 2 counterpart, now serving as a mix of the Anti-Tank kit and the former Engineer kit. This gives the Engineer access to faction specific rocket launchers for dealing with hostile armor alongside his shotguns, Blowtorch, and Anti-Vehicle Mines.

This makes the Engineer a fairly invaluable asset to the team, being the most potent vehicle killer on the map as well as being necessary to keep friendly vehicles up and running. The Engineer does have issues with combating infantry, however. While his shotguns can potentially kill in one shot, they have a low rate of fire, a slow reload, and short range, making it ill-advised for the Engineer to take on multiple enemies alone. Instead, the Engineer preforms best in a supporting role, focusing on enemy vehicles while his teammates deal with hostile foot soldiers.

The Engineer in Battlefield 2142 is a combination of the Engineer and Anti-Tank kits of past installments. As such, it is the only class responsible for repairing and destroying vehicles, being equipped with a wire-guided shoulder-fired missile in order to destroy enemy vehicles, a submachine gun for close encounters and a Repair Tool to repair friendly vehicles. Engineers can also unlock an anti-air missile and an anti-tank rifle.

Engineers are a fundamental asset for the team, whether if it is to defend missile silos from enemy gunships and battlewalkers or for a fast and efficient strike on the enemy Titan.

The Engineer in Battlefield: Bad Company 2 is a combination of past Engineer kits from Battlefield 2 and Battlefield 2142 as well as the Demolition and Specialist kits from Battlefield: Bad Company. The Engineer kit once again has access to a repair tool, which can both repair friendly vehicles and dismantle hostile vehicles, and can also be a last-ditch melee weapon if needed. The Repair Tool repairs at a moderate speed, and is a key component of any armored attack or defense.

The Engineer also has access to several anti-tank weapons, the Anti-Tank Mine and three anti-tank missile launchers, the RPG-7, the M2 Carl Gustav and the M136 AT4. The anti-tank mine functions similarly to previous games, but this time detonates only when enemy vehicles pass over the mine or if destroyed manually. The rocket launchers all differ, but remain the normal anti-tank weapon of choice for most Engineer players. The M2 and the RPG-7 both fire unguided rockets, but can lock onto Tracer Darts to engage faster targets, such as helicopters and Quad Bikes. The AT4 is a specialized anti-tank launcher, and can be manually guided onto the target by the player.

For personal defense, the Engineer kit has access to several submachine guns and compact carbines. These weapons work well at close-medium ranges, and can prove deadly to any player in the open or in light cover, whereas players in heavier cover, such as behind walls and in buildings, can be flushed out by grenades or by the Engineer's own rocket launchers. The Engineer kit can also make use of all-kit weapons, such as shotguns, to engage enemies at longer or shorter distances. 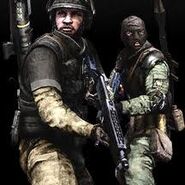 The US Army Engineer in an early screenshot for Battlefield: Bad Company 2.

A Russian Engineer riding on a quad bike in an early screenshot for Battlefield: Bad Company 2.

The infantry combat role of the Engineer kit changes in the expansion pack, with the selection of weapons available to the kit - the UZI, the M10 and the PPSh - being more suited to close range combat, instead of the close-medium range combat that the base game kit was suited to. All Engineer-specific weapons lack the suppressor present on all base weapons, which reduces the level of stealth the Engineer has.

Battlefield Veterans with access to the M1 Garand can use it to fill a medium-range role, but fighting at such a range plays against the strengths of the Engineer kit, and can be problematic when needing to dart forward to repair vehicles.

US Engineer aiming the RPG-7

The Engineer kit in Battlefield Play4Free functions almost identical to the Battlefield: Bad Company 2 counterpart. Its role is to destroy enemy vehicles and repair friendly ones. It is equipped with a submachine gun, an Anti-Vehicle RPG and the Repair Tool; Anti-Tank Mines and the XM-25 Airburst Grenade Launcher are obtainable via Training customizations.

The Engineer is primarily a frontline kit, being almost unable to engage at longer ranges, due to the short effective range of most available submachine guns. Repairing vehicles is the player's primary aim, although in heavy firefights this can be difficult. By going behind a vehicle, and using breaks in enemy fire to dart forward and repair vehicles, the player can assist his/her team and stay alive, which can be especially important when securing a flag.

The Engineer is featured in Battlefield Online.

The Engineer in Battlefield 3, in a role nearly identical to that of most of its past forms. It is responsible for both the upkeep of friendly vehicles and the elimination of hostile vehicles. They can also be used as a type of Spec Ops class suitable for maps like Tehran Highway and Caspian Border. It has access to carbines and compact assault rifles such as the M4 Carbine and AKS-74u, as well as a battle rifle, the SCAR-H.

While the Engineer's role of maintaining the upkeep of friendly vehicles and destroying hostile ones is largely unchanged from previous titles, the Engineer's ability to deal with hostile infantry is mostly restricted to close quarters combat due to the kit's weapon class now being the Personal Defense Weapons. However, the Engineer can still deal with enemies at longer ranges if the player opts to equip a Carbine or Designated Marksman Rifle. 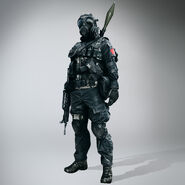 The standard USMC engineer from Battlelog.

USMC Engineer in UCP from Battlelog.

The standard RGF Engineer from Battlelog.

RGF Engineer in Partizan from Battlelog.

RGF Engineer in KLMK from Battlelog.

The standard PLA Engineer from Battlelog.

PLA Engineer in Urban from Battlelog.