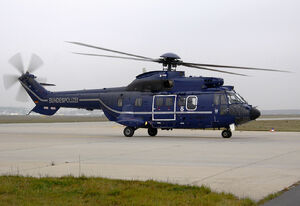 The Eurocopter AS332 Super Puma is a four-bladed, twin-engine, medium-size utility helicopter developed and marketed by Aérospatiale and Eurocopter (now Airbus Helicopters). It is an enlarged and re-engined version of the original Aérospatiale SA 330 Puma. First flying in 1978, the Super Puma succeeded the SA 330 Puma as the main production model of the type in 1980; since 1990 Super Pumas in military service have been marketed under the AS532 Cougar designation.[1]

The Executive Helicopter is a vehicle featured in Battlefield Hardline. It is the Criminal counterpart to the Transport Helicopter, serving as an aerial transport and spawn point with two gunners.