The McDonnell Douglas (now Boeing) F/A-18 Hornet is a supersonic, all-weather carrier-capable multirole fighter jet, designed to attack air and ground targets. The F/A-18 was derived from the YF-17 in the 1970s for use by the United States Navy and Marine Corps. The Hornet is also used by the air forces of several other nations. It has been the aerial demonstration aircraft for the U.S. Navy's Flight Demonstration Squadron, the Blue Angels, since 1986.

The fighter's primary missions are fighter escort, fleet air defense, SEAD (Suppression of Enemy Air Defenses), air interdiction, close air support and Aerial reconnaissance. Its versatility and reliability have proven it to be a valuable carrier asset, though it has been criticized for its lack of range and payload compared to its earlier contemporaries, such as the F-14A Tomcat in the fighter and strike fighter role, and the A-6 Intruder and A-7 Corsair II in the attack role.

The F/A-18A Hornet appears in Battlefield 2 as one of the four USMC Fixed-wing aircraft in the game, along with the F-35B, F-15E Strike Eagle and A-10 Thunderbolt II. Its counterparts in the game are the MEC MiG-29 Fulcrum, PLA J-10 and the EU Eurofighter Typhoon.

Compared to the F-35B, the Hornet features similar armaments and belongs to the same faction. Unlike the F-35, however, the Hornet does not have VTOL/STOL capabilities, making it less versatile and at a disadvantage in combat.

When compared to other fighter jets such as MEC's MiG-29 and PLA's J-10, The F/A-18 has an advantage over ammo rounds as it has 600 rounds of canon rounds while the other two mentioned earlier has 300 rounds.

It is not recommended to use the F/A-18 for bombing purposes, as its two bomb payload has a small area of effect. When used for bombing, it should only be used for small areas, or when destroying slow vehicles like tanks. The F/A-18, like all fighters, is to be primarily used for taking out other fighters and helicopters, as its armament is designed for such task.

Third person view of the F/A-18

Two F/A-18C Hornets appear in Battlefield: Bad Company 2 acting as air support in the missions Cold War and High Value Target. One also crashes in the cutscene after a US defeat on Valparaiso. Two F/A-18s can be seen bombing near the middle of the map at the beginning of a match on Panama Canal, alongside radio chatter. These bombs cannot harm the player, even if one makes it to the target zone before the jets arrive. Two more Hornets also appear bombing the RU spawn after a US victory on Panama Canal, as well as another two bombing base Charlie after a US victory on Laguna Alta. Two more can also be seen flying past the map on Isla Inocentes, after the US destroys the first two M-COMs. The F/A-18 is never usable by the player.

"A multirole jet fighter aircraft introduced in 1983 and used today by the USMC. The C and D variants include upgraded avionics and weapons capability."

The F/A-18 Super Hornet (both E and F variants) appears in Battlefield 3 singleplayer and multiplayer.

The F/A-18F Super Hornet is a two-seater variant of the F/A-18. It appears in the singleplayer mission Going Hunting, with Jennifer Hawkins and her pilot operating as call sign "Shark 4-6" They engage IRIAF jets over Iranian skies and destroy targets at Mehrabad International Airport. It can utilize the AIM-9X Sidewinder air-to-air missile, the M61 Vulcan 20mm gatling gun, IR Countermeasures (Flares), and the AGM-88 HARM Anti-Radar missile, as well as a laser designator to paint targets for GBUs and A-10 Strikes.

45 per bullet, with no damage drop

The F/A-18E Super Hornet appears in Battlefield 3 as the US main fighter jet. It is equivalent to the Russian Su-35BM Flanker-E. It also features a stick-shaker mechanism to warn players of imminent stalls, signified by a loud bang.

Being a multirole fighter the F/A-18E Super Hornet has a 20mm gun and optional air-to-ground Rocket Pods and Guided Missiles or Heat seeking Missiles for air-to-air purposes.

The F/A-18E appears only in certain maps in Conquest gamemode. It does not appear in any Back to Karkand maps, where the F-35 is instead featured against the Su-35BM.

At one time, IR Flares were the initial unlock at 300 Jet Fighter score. The requirement has since been abolished, with flares effectively being available from first use, as newer pilots have trouble negotiating anti-air threats from both ground and other aircraft.

A high-quality render of the F/A-18E. 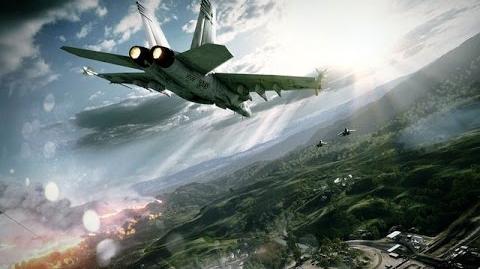 The F/A-18F Super Hornet appears in Battlefield 4 aboard the USS Titan in the singleplayer mission South China Sea as well as Suez. It is only used as scenery and is not available to pilot.

45 per bullet, with no damage drop

The F/A-18E Super Hornet is a vehicle featured in Battlefield 2042. Available exclusively in the Battlefield Portal, it functions in the exact same manner as it's counterpart in Battlefield 3.