The FN F2000 (French: Fusil 2000; English: Rifle 2000) is a bullpup assault rifle made by the Belgian firearms company FN Herstal. Designed in the late 1990s, the F2000 is a compact assault rifle that fires the 5.56x45mm NATO round, allowing the F2000 to be deadly at medium range yet compact and easy to carry, due to its bullpup configuration. FN's GL1 grenade launcher can be attached to the weapon's handguard, while optics can be fitted to a Picatinny rail mounted on the top of the receiver. The F2000 has a high rate of fire compared to other assault rifles (850 rounds per minute) and can use STANAG magazines from most NATO assault rifles.

In Battlefield 2, the F2000 is a tier-two unlock for the Assault kit and the default assault rifle of the SAS Assault kit. The weapon comes with its standard optic, as well as the GL1 under-barrel grenade launcher. It has a noticeably lower rate of fire in Battlefield 2 compared to other games it is featured in to balance it with other assault rifles. 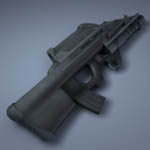 The F2000 unlock icon.
Add a photo to this gallery

Must be a Battlefield Veteran

The F2000 is an assault rifle with an extremely high rate of fire, making up for its low of damage and moderate accuracy. Only available in multiplayer and issued to the Assault Kit, the weapon isn't used very often because of the fact that it is only unlocked through DICE's "Find All Five!" program by becoming a Battlefield Veteran. One issue that plagues the F2000 is the frequent reloading due to its high rate of fire. The reload is quick however.

To redeem the F2000, the player must have a veteran status of 1+ and they will receive the weapon, this is the only weapon of the "Find all Five"that does not have a code.

The F2000 in Battlefield: Bad Company on the multiplayer map Harvest Day

The F2000's iron sights
Add a photo to this gallery

In Battlefield: Bad Company 2's singleplayer, the F2000 Assault is first encountered on Sangre Del Toro. It is equipped only with iron sights and its GL1 under-barrel grenade launcher. It is later encountered on Zero Dark Thirty equipped with a Red Dot Sight in addition to its grenade launcher, used by a Russian after Marlowe is hit by a flashbang grenade. It is a good alternative to Marlowe's standard rifle, the XM8 Prototype, as it can fulfill the close-range role of an SMG, without the smaller cartridge, or can equally be effective as a medium-range assault rifle that can take on all troops, including those with Type 88 LMG's or mounted KORD HMG's. Both variants of the F2000 are Collectible Weapons.

In multiplayer, the F2000 is the third assault rifle issued to the Assault kit, requiring 8,000 points to unlock. It has the highest rate of fire of all assault rifles at 850 rpm with the cost of low damage per shot. This makes it somewhat effective in close quarters combat, but hard to use effectively at longer ranges much like an SMG, unless the user equips Magnum Ammunition. However, unlike an SMG, the F2000 has an attached GL1 grenade launcher, which gives the user an edge against opponents at medium range, especially if they are in cover. The weapon can be modified by adding a Red Dot Sight or 4X Rifle Scope, when unlocked for the Assault kit.

The iron sights on the gun are rather small, but are effective for pinpoint accuracy, with a very prominent and thin front post.

The F2000's main role is as a mobile assault rifle. It has the smallest hipfire spread of all assault rifles, whilst standing still or moving, and the smallest effect on spread whilst moving and aiming simultaneously of almost every weapon, only equal to the UZI and UMP-45.

The F2000's stats in Battlefield: Bad Company 2.
Add a photo to this gallery

In Battlefield Play4Free, the F2000 is a purchasable assault rifle for the Assault Kit. It features decent damage output but at the cost of higher recoil. It features a 22-round magazine by default, but suffers from the second longest reload time behind the XM8 due to its bullpup nature.Because of the design of the weapon, it performs better in close quarters with a larger hip spread that can be beneficial at point-blank range. However, the weapon can have trouble engaging enemies past mid-range.

to have forever, putting the F2000 in a mild price range among the other available assault rifles.

F2000 highlated at the Play4Free website.
Add a photo to this gallery

http://symthic.com/?s=bf3Retrieved on Sept. 11th
"A Belgian manufactured bullpup Assault Rifle configured in the Tactical setup with top and forward rails for mounting a variety of accessories. The rifle is in use with a variety of Special Forces units including Pakistani, Peruvian, Chilean, Indian and Polish. It has also been adapted as the standard rifle of Saudi Arabia and Slovenia. The bullpup configuration prevents it from mounting underslung weapons, but a high rate of fire makes it lethal in CQB."

The F2000 can be unlocked at an Assault score of 124,000. It lacks the GL1 grenade launcher module and cannot accept underslung rail weapons such as the M320 and the M26 MASS due to its bullpup design, but can still accept the Foregrip and Bipod attachments due to its forward tactical rail.

With a high rate of fire, the F2000 also has the highest and most unpredictable recoil of all intermediate assault weapons, as well as high spread. This high rate of fire and unpredictability makes the F2000 best suited for close quarters. This is further supported by it's low spread when fired from the hip, as well as its relatively low spread while moving. This makes the F2000 an efficient weapon for close range advance while suppressing tactics.

Battlefield Premium members can equip the Navy Blue Digital Camo for the F2000, or the Woodland Oak Camo by completing the F2000 Specialist assignment.

The F2000 in the singleplayer level Comrades.

F2000 With the Premium exclusive Navy blue digital camo.
Add a photo to this gallery

Retrieved from "https://battlefield.fandom.com/wiki/F2000?oldid=187779"
Community content is available under CC-BY-SA unless otherwise noted.