The FIM-92 Stinger is a man-portable infrared homing anti-aircraft missile system produced by Raytheon Missile Systems and was built to replace the obsolete FIM-43 Redeye. It has a range of 4,800 meters (15,700 ft) and can hit aircraft at altitudes up to 3,800 m (12,500 ft).

It has been in service since 1981 and remains as the current MANPADS in use with the United States Armed Forces and with 30 other countries.

The Stinger is featured in Battlefield 2 as a stationary anti-aircraft site that can lock on and track enemy aircraft.

It is used by 4 factions: the USMC, the Navy SEALs, the SAS, and the European Union. It has two missiles per magazine, with an unlimited amount of reloads. Although only 2 missiles can quickly take down any type of aircraft, and they also do decent damage against light vehicles, they are extremely weak against armor: around twelve missiles are needed to destroy a tank. The launcher's wide set deviation value of 5 further limiting its surface attack capability, as the missile's general low damage against ground vehicles doesn't help much and direct hits are necessary to do any real damage, especially against APCs and MBTs. The missiles also fly upward after traveling a certain distance, making surface attacks past that distance impossible. Since it fires the same missile projectile as the IGLA (referred to as "igla_9k38" in the game file), it performs exactly the same with its counterpart, and any differences between the two are purely aesthetic.

The Stinger is featured in Battlefield 2: Modern Combat as a stationary anti-aircraft site with two missiles that lock on and track enemy aircraft.

Missiles are fired one at a time after a brief lock-on period during which the trigger must be held and the crosshair fixed on the target, with a total of 500 available missiles (although it is impossible to use all of them in a standard 20-minute round). The missiles can quickly take down an enemy helicopter with ease. It is possible, though difficult, for helicopters to avoid being destroyed by these missiles with evasive maneuvers, causing the missile to crash into the ground or a building. It cannot be used against ground targets.

The Stinger in Battlefield 2: Modern Combat. (Xbox 360)
Add a photo to this gallery

1 rocket
"Rocket launcher with seeking capability, the skies are not safe anymore."

Sam's SAM is a weapon featured in Battlefield Heroes for the Royal Army. Available for the Gunner kit, it was introduced in the Vehicle Mayhem update for the game on January 25, 2012. Unlike other rocket launchers, this weapon has the capability to lock-on and seek enemy infantry and vehicles. Its counterpart is Albert's Anti-Air Arrow for the National Army.

The Stinger is a anti-air missile featured in Battlefield Play4Free on Oman. It performs identically to the Russian IGLA. It can shoot two missiles before reloading and is incredibly effective against enemy aircraft and helicopters after locking on to their infrared signature. If an enemy deploys flares, the missiles will try to follow after them and will miss their original target.

The Stinger can even, to an extent, be used against ground targets such as tanks and infantry. However, it is very inaccurate unless locked on to aircraft and it is likely the user will miss their target as the missile starts to curve upward over time after fired. There is a glitch, where a teammate shoots at another teammate, this causes the other teammate to be launched into the air.

The sight of the Stinger.

The Stinger when locked on to a target.

Stinger in Play4Free
Add a photo to this gallery

http://www.ign.com/wikis/battlefield-3/FIM-92_Stinger
"The FIM-92 Stinger is a man portable infrared homing surface-to-air missile (SAM). The Stinger is capable of locking on and engaging a large variety of craft, from small UAVs up to low flying helicopters and jets. The Stinger requires a locked target in order to fire."

The FIM-92 Stinger is a anti-air missile featured in Battlefield 3.

The FIM-92 Stinger is available in the mission Rock and a Hard Place, where the player is required to down an attacking Su-25TM using a Stinger launcher located nearby.

The FIM-92 Stinger is unlocked for the USMC Engineers at 3,000 Engineer score, along with the SA-18 IGLA used by the Russian Ground Forces. As a guided missile launcher, the Stinger can be hindered by flares or other countermeasures, however it currently ignores the Below Radar specialization. It requires clear line-of-sight in order to acquire a weapon lock on enemy aircraft. It is very effective as an anti air weapon, disabling most air vehicles in one shot. It performs on par with the IGLA, and any differences between the two are purely cosmetic. 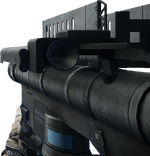 FIM-92 Stinger in-game.
Add a photo to this gallery

350 meters
"Fire and Forget Anti-Air missile capable of Mobility Kills on most aircraft at short range. STINGER missiles will guide themselves to the target after launch."

The FIM-92 Stinger is an anti-air missile launcher featured in Battlefield 4.

Like in Battlefield 3, it is a fire-and-forget launcher, meaning it does not require a constant lock-on like the SA-18 IGLA does.

However, the launcher has a shorter range of 400 meters, compared to the Igla's 550 meters but its 'Fire-and-Forget' nature makes it advantageous for a quick response versus enemy aircraft, which makes for much less time for exposure.

The missiles travel slower and easier to evade, even rarely without countermeasures. Because of its range, It is best advised to use in smaller maps, so that the enemy aircraft can fly out of range before the player has a chance to fire. Also, much like the Igla, they will track and engage aircraft flying at low altitude.

The following is a list of effects and damage to specific air vehicles from impacts by the FIM-92 Stinger Missile. Damage results are consistent at any angle of impact.

FIM-92 Stinger's aiming reticle.
Add a photo to this gallery

1 Missile
"Fire and Forget Anti-Air missile capable of Mobility Kills on most aircraft at short range. STINGER missiles will guide themselves to the target after launch."

The FIM-92 Stinger is an anti-air missile launcher featured in Battlefield Hardline. While it functions in a similar manner to the Battlefield 4 counterpart, the Stinger is now a Battle Pickup. It only holds two rockets upon being picked up and only one if picked up from the trunk of a vehicle due to the Anti-Air Armory.

Retrieved from "https://battlefield.fandom.com/wiki/FIM-92_Stinger?oldid=368334"
Community content is available under CC-BY-SA unless otherwise noted.