The 7.7 cm Feldkanone 96 neuer Art (7.7 cm FK 96 n.A.) was a field gun used by Germany in World War I, The gun combined the barrel of the earlier 7.7 cm FK 96 with a recoil system, a new breech and a new carriage with existing FK 96s were upgraded over time. The FK 96 n.A. was shorter-ranged, but lighter than the French Canon de 75 modèle 1897 or the British Ordnance QF 18 pounder gun.

The FK 96 n.A saw service into the 1930s with several nations which gained their independence following WW1, including Finland, the Second Polish Republic, Lithuania, Latvia and Estonia. The Kingdom of Bulgaria and the Ottoman Empire also made use of the gun.

German Field guns appear throughout "Storm of Steel" and "Through Mud and Blood" as the enemy's primary means of damaging the player's tank. German cannons have unique, red-blue-yellow-white dazzle camo (except Storm of Steel).

Ottoman field guns appear in The Runner and Nothing Is Written. In the ANZAC campaign they are used to stop British offensive. During the Arab Revolt Ottomans use them to fight the insurgents. Captured FK 96s are also good weapon against armored vehicles, such as Canavar. Ottoman field guns have light khaki desert camo (except the artillery on Cape Helles, that has dazzle camo).

A distinct vapor/smoke trail follows fired shells (more so than in multiplayer), allowing the player to identify these threats from afar if not yet spotted by teammates. Field guns are highly vulnerable to flanking due to their slow turn rate.

As with other emplacements, its operator can be killed separately, possibly allowing other infantry (or the player) to re-man the gun. Destroying the gun itself ensures it cannot be used again.

The FK 96 was first seen in Battlefield 1 at the "EA Play" event on June 12, 2016. It is the anti-tank gun emplacement for all factions, available near certain flags, mounted on a carriage.

It is very accurate at range and inflicts great damage against armor and structures. It is also placed in areas with good visibility, to better assail such targets from a distance.

Among the new animations featured in Battlefield 1 is that of the FK 96 being reloaded for each shot. This action, along with the weapon's shield, limits the player's vision. A peculiarity of the emplacement's operation is that the cannon will not be automatically reloaded after firing, but must be manually done by pressing Fire again or Reload. This gives the gunner time to view and adjust his aim after each shot instead of forcing him into the reload animation. This may also mean that an unattended gun may be unloaded, preventing its immediate use.

The gun has infinite backup ammo, though non can be seen unless the player is reloading.

Turn rate is very slow, as the user must drag the carriage base of the gun. This can be sped up somewhat by pressing Move Left or Move Right, but is still far slower than any other vehicle. The gun's shield provides some protection from the front, but the user is otherwise exposed from sides, rear, above, and through viewports.

Since emplaced weapons are still considered vehicles, players using the FK 96 cannot be attacked with takedowns, nor can they be revived if killed.

The gun itself can be destroyed with anti-vehicle weapons, and generally takes 2 minutes to respawn. Using the Repair Tool can quickly repair it to working conditions. 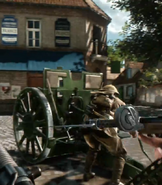 The FK 96 in the official trailer