The Magpul FMG-9 (Folding submachine Gun) is a prototype foldable submachine gun developed by Magpul Industries. It is a lightweight weapon built around the Glock 18 and based off the design of older submachine guns like the UC-M21 and ARES FMG, where it is able to fold up into a small box like package. This, coupled with the weapon's small size, allows it to be easily concealable. Developed as a show piece for SHOTSHOW 2008, Magpul has not announced any plans to actually produce the weapon.

The FMG-9 appears in Battlefield Hardline.

0.26
0.3 ┴ 0.3
"The FMG-9 is one of a new generation of lightweight folding submachine guns that can be easily concealed or disguised. The FMG-9 is only slighty larger than pistol-size, making it good in close quarters."

The FMG9 is a weapon featured in Battlefield Hardline.

The FMG9 is unlocked upon completing the Boomer Connection Case File alongside the K10 and the UZI.

The FMG9 is a submachine gun for the Mechanic, and is available to both factions upon the completion of the Mechanic Syndicate assignment. 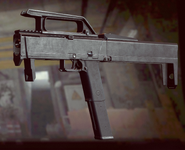 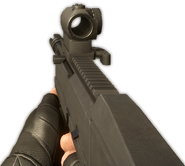 Equipped with a Micro T1 and Heavy Barrel