The Fusil Automatique Léger ("Light Automatic Rifle") or FAL is a semi-automatic/selective fire battle rifle produced by the Belgian armaments manufacturer Fabrique Nationale de Herstal (FN). During the Cold War it was adopted by many NATO countries, with the notable exception of the United States. It is one of the most widely used rifles in history, having been used by more than 90 countries. The FAL was predominantly chambered for the 7.62×51mm NATO round, and because of its prevalence and widespread use among the armed forces of many NATO countries during the Cold War it was nicknamed "The right arm of the Free World".

The FAL appears in Battlefield Hardline as the FN FAL. The SA-58 OSW, a modernized variant of the FAL, also appears in Hardline.

The FN FAL is a weapon introduced in the Battlefield Hardline: Criminal Activity expansion and is exclusive to the Enforcer kit for Criminals. It can be bought for a hefty $75.000

The FN FAL has the highest fire rate out of all the Enforcer's Battle Rifles, but has considerable first-shot recoil and increase in spread while fired in fully automatic. Attaching a Stock, Compensator and an Angled Grip help can maximize the user's ability to control the weapon. Though it increases recoil, Heavy Barrel can help with spread, increasing its viability in medium range.

Firing in short bursts is a great way to control its rapid decrease in accuracy/increase in bullet spread over time, though when forced into a close range situation the FN FAL has considerably tighter hipfire than most other Battle Rifles.

The FN FAL is a great weapon both offensively and defensively in the right hands, especially on conquest.

The FAL equipped with a Heavy Barrel and Extended Magazine

The FAL's synthetic furniture when equipped with the Stock attachment 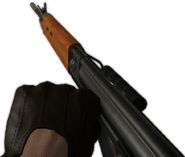