PC
"On July 10th, 2140, as part of Operation Thunder, fifteen squadrons of PAC gunships wrested control of the skies above eastern Germany. The victory allowed PAC Titans to airdrop entire regiments of the Northern Command Group behind the EUs Brandenburg Line. Surrounded, the EU Expeditionary Force quickly capitulated. The path to Berlin was cleared. On August 15th, the PAC waged an all-out offensive on the city. After two months of intense fighting, Berlin fell. The remaining EU forces retreated to France where they would make a last stand before evacuating to Africa."

Fall of Berlin is a multiplayer map in Battlefield 2142. It features urban infantry combat, with vehicles taking a support role. It is playable in Conquest and No Vehicle Conquest, as well as Co-op Conquest. For many control points on the map, there are multiple paths to the flag, forcing defenders to split their forces. Teamwork and coordination are key to breaking through enemy defenses for the PAC, and repelling PAC attacks and counterattacking PAC-controlled flags for the EU.

The PAC uncapturable base is located on the east end of the map. There are two paths to approach the Crossroads from the Streets: a northern infantry-only route that allows the PAC to make use of the path north of the Crossroads to flank the EU and also by following the road out of the base. The PAC should be not take long to attack the EU control point - should the defenders get time to get into position and set up defenses, the PAC will have a much harder time attacking the base. The PAC's Battlewalker should use its boost ability to rush to the point and destroy the Rorsch before it gets manned.

The EU's forward base is located at a street corner to the west of the PAC base. There are several flanking routes that can be used to surround the base and EU defenders must be wary of all of the possible routes. The EU should use the Rorsch, which spawns near the corner, to destroy the incoming PAC vehicles before they can pin down the defenders. Defenders should split their forces among the three routes, and use the generous cover to defend against the incoming PAC. EU engineers should place mines along the road to prevent the PAC from using their vehicles to help with the assault.

A flanking route north of the Crossroads

The flanking route to the south of Crossroads

Another EU control point is located near the center of the map, nearby a roadblock. This base, like the Crossroads, has multiple flanking routes that the PAC can use to flank the control point. The EU should again spread out their defenders to cover all routes into the base, while mining the road to prevent vehicles from getting close to the flag. Near the flag, there is a tunnel that leads through a building that serves as the quickest route to the base for PAC infantry and should be defended by EU Support and Assault players. APM mines should be placed by the EU near the tunnel entrance by the flag as a last line of defense against PAC infantry.

The tunnel near the flag, looking east

The EU's base lies at the western end of the map, in the center of a plaza. The flag is surrounded by three large buildings that can provide cover to attackers and defenders alike. Each building has multiple stories that are accessible to the player and each has large amounts of cover to hide behind. North of the base, there is a monorail station that is accessible by ladder. While the track is blocked off in either direction, snipers can use it to pick off enemies trying to capture the relatively cover-less base. The EU's Commander Assets are located here in 16-player Conquest.

The Outpost is the EU main base in 32-player Conquest. This is usually the EU's last stand position against the PAC and is hard for them to take. Combined with an uphill fight, PAC troops must also bring their vehicles from their base on the opposite side of the map to counter EU vehicles. EU troops also have access to rooftops and buildings to use to attack PAC troops. Small groups or individuals should take to the map's limits to flank the PAC and recapture other bases, which can lead to the enclosing of PAC forces on a single control point. EU commander assets are located here, usually safe from PAC saboteurs. While the northern entrance offers a quicker route to the flag, the southern route has more cover that allows the PAC forces to hide from EU snipers and other troops.

The EU base in Fall of Berlin

Another view of the EU base

The area in front of the Outpost

For both 16- and 32-player Conquest, the Commander Assets are located around the control point Streets. 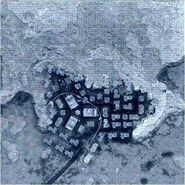