The Fallschirmjäger are the main enemy force encountered in the singleplayer war story Tirailleur, as well as in the 1944 section of My Country Calling. Although armed similarly to the Wehrmacht soldiers found in Under No Flag and Nordlys, they have a unique visual appearance. Early on in the chapter, they can be found wearing a variation of the green splinter camouflage used on the Jagdflieger torso whereas later on they switch to a distinctive orange pattern based on the Luftlandtruppen set. They also make use of unique headgear such as the Standard Fallschirmjäger and Stag's Blood helmet. Save for the camouflage, the elite versions of their soldier classes look the same as the regular German faction. Fallschirmjäger troops can also be seen marching in formation in the opening cutscene of The Last Tiger.

One unnamed member of the unit appears as a minor character in Tirailleur. 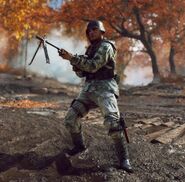 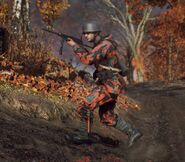 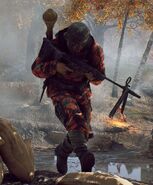