The Farquhar-Hill is a Codex Entry featured in Battlefield 1, introduced in the Turning Tides expansion. It is unlocked by obtaining 10 kills with the Farquhar-Hill. 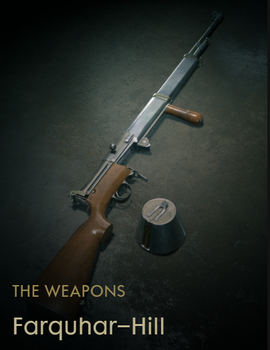 The Farquhar-Hill was a semi-automatic rifle developed in England by Colonel Moubray Farquhar and gunsmith Arthur Hill, and first patented in 1908. It was originally a recoil-operated weapon, and was tested by the British military starting in 1908, but the rifle was complicated and unreliable. After several iterations, Farquhar and Hill changed the design to a gas operated action in 1911. The updated rifle used a relatively complex mechanism with three springs, but this gave the Farquhar-Hill gentle recoil, and in theory allowed the weapon to tolerate a wide range of powder charges.

The updated rifle was chambered for the standard British .303 cartridge and fed from a 19-round drum magazine. It had a vertical fore grip which position could be adjusted along a rail under the barrel, and the rifle featured a bayonet mount. The Farquhar-Hill rifle continued to be tested by the British Army during WW1, including frontline troop trials, and it did see some service with British aviators in a similar manner to the Selbstlader M1916 and Mondragón rifles with the German air force. In 1918, the British army finally officially adopted the Farquhar-Hill rifle as the “Rifle .303 inch, Pattern 1918” and ordered 100,000 of them, but the war ended before production could be ramped up. During the 1920s and early 1930s, the weapon was redesigned into the Beardmore-Farquhar light machine gun, fed from a top-mounted magazine, which was evaluated by the British army but never adopted.

Retrieved from "https://battlefield.fandom.com/wiki/Farquhar-Hill_(Codex_Entry)?oldid=343237"
Community content is available under CC-BY-SA unless otherwise noted.