Hold out until QRF arrival:

Fear No Evil is the eighth mission in the singleplayer campaign of Battlefield 3. This mission continues the mission of the 1st Marine Tank Battalion to rescue Misfit 1-3.

A convoy comprised of Anvil 3-3 and 3-4 is tasked to rescue Misfit team. The player plays as Jonathan "Jono" Miller who is entering Tehran, Iran in his M1A2 Abrams tank. The convoy tries to make contact with Misfit but is unable to do so due to the tall structures of the city. As the convoy nears the bank, the main road is found to be blocked by rubble. The convoy then turns to a narrow alley and buttons down all hatches to avoid sniper fire. Once the convoy exits the alley and travels a few meters, the convoy is ambushed by the PLR. The PLR manages to destroy Anvil 3-3. Jonathan then smashes his M1A2 into a building to escape the ambush. After busting through the building, Miller manages to destroy 3 T-72s along with several PLR infantry men assaulting the bank that the Misfit unit is using as a safe haven. Miller reaches the bank but his tank is hit by a Javelin captured by the PLR. The tank is able to maintain power but the engine and hydraulics are disabled. The Anvil unit is at last able to make radio contact with Misfit 1-3.

Misfit informs Miller that they have captured a Russian portable nuke and must secure it before the PLR reclaims it. Eventually, Saint 4-0 arrives in order to rescue Misfit and safely transport the nuke. Anvil requests for an exfil with Misfit as their tank is no longer operational. Saint 4-0 denies the request as they are full from the previous MED-EVAC. Misfit team escapes in a UH-1Y Venom helicopter with the portable nuke.

Hold out until QRF arrivalEdit

Anvil 3-4 is told that QRF will arrive in 15 minutes. Miller boldly tries to fight off the PLR with the machine gun and frantically requests for immediate air support to Anvil 6-6. Anvil 6-6 replies that the air support is coming. Miller and his crew however are soon overrun and then captured by the PLR. The mission then ends with a cutscene where Faruk Al-Bashir gives a short monologue and shortly after, Miller is executed by Solomon. 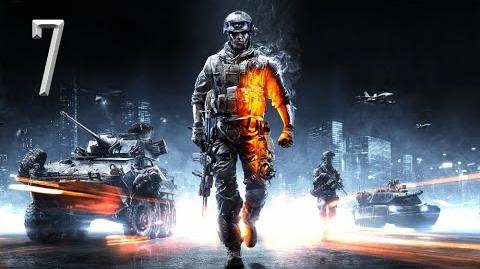 Battlefield 3 - Fear No Evil
Add a photo to this gallery

Retrieved from "https://battlefield.fandom.com/wiki/Fear_No_Evil?oldid=351451"
Community content is available under CC-BY-SA unless otherwise noted.