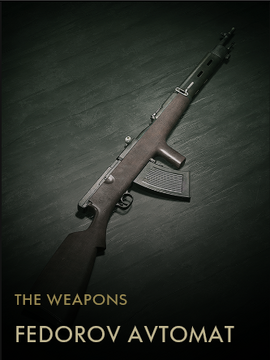 Vladimir Fedorov was a captain of the Russian Imperial Army who began developing his first self-loading rifle in 1906, then chambered for the standard Russian 7.62x54mmR cartridge used in the Mosin-Nagant M91 rifle. Fedorov's prototype fired only in semi-automatic mode, and like the M91 it had a fixed five round magazine fed by stripper clips. Military trials began in 1911, and in 1912 the Rifle Commission of the Russian Army ordered 150 more of Fedorov's rifle for further testing. In 1913, Fedorov rechambered the self-loading rifle for his experimental 6.5 mm cartridge, which produced less recoil and was more suitable for automatic fire. This model was tested in late 1913, but further trials and development was halted by the outbreak of WW1. Captain Fedorov was sent to the Western Front in 1915 to observe the deployment of small arms, and there he was impressed by the Chauchat machine rifle, which inspired him to convert his self-loading rifle to use 25-round detachable magazines and fully automatic fire. The same year the Russian Army was in desperate need of lightweight automatic weapons, and it ordered the manufacture of Fedorov's new machine rifle - but to save time and resources it was decided to convert the weapon to use the similar Japanese 6.5x50mmSR Arisaka cartridge, which Russia was already using. The Russian Army adopted the Fedorov Avtomat in 1916, and it was first used in combat on the Romanian front, for example by a special unit of the 189th Izmail infantry regiment which were armed with 45 of the 6.5mm Fedorov Avtomats, and 8 of the earlier 7.62mm self-loading rifles. The Fedorov Avtomat's were also used by aircrews, particularly aboard the giant Ilya Murometz [sic] bombers. At the end of 1916, 25,000 Fedorov Avtomats were ordered, but this was lowered to 5,000 in early 1917 when the Revolution shook Russia. Far fewer than that were made during WW1, and by 1924 only 3,200 Fedorov Avtomats had been manufactured. A few years later the weapons were put into storage, but in 1940 some of the Avtomats were issued to elite troops in the Winter War with Finland, when Russia again had a desperate need of automatic assault weapons. Today the Fedorov Avtomat is known as one of the very first weapons to fit the modern concept of an assault rifle, decades ahead of its time.

Retrieved from "https://battlefield.fandom.com/wiki/Fedorov_Avtomat_(Codex_Entry)?oldid=343219"
Community content is available under CC-BY-SA unless otherwise noted.