First Aid is a Codex Entry featured in Battlefield 1. It is unlocked upon performing ten heals with either the Bandage Pouch or Medkit on teammates.

FIRST AID IN THE GREAT WAREdit 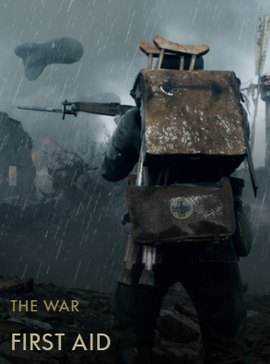 Nothing was scarier than lying bleeding and barely breathing in no man's land. Your comrade would hurriedly pull out the small waterproof sealed first aid kit that was kept in a jacket pocket of every soldier's uniform. The kit usually contained two gauze dressings that were designed to stop the bleeding - one for the entrance would, and one for the exit. If the soldier was lucky, this would keep him alive long enough for a stretcher-bearer to reach him.

The stretcher-bearer would have a larger first aid kit with bigger dressings for treating shrapnel wounds. Once back in the trenches, the soldier would be given shots against tetanus and other infections, and was treated to prevent shock and further blood loss.

Retrieved from "https://battlefield.fandom.com/wiki/First_Aid_(Codex_Entry)?oldid=343309"
Community content is available under CC-BY-SA unless otherwise noted.