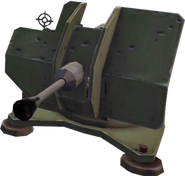 Unlimited (Overheat)
The Flak 38 is a stationary weapon featured in Battlefield V, and was first seen being towed by a Valentine tank in the Battlefield 5 Official Reveal Trailer.

In multiplayer, the Flak 38 is the anti-aircraft emplacement of the German faction, equivalent to the 40mm AA used by the United Kingdom, USA and Japan.

Compared to the 40mm gun, the Flak 38 has a much higher rate of fire at around 240 RPM, and as such is more able to hit fast moving targets, at the cost of reduced impact and airburst damage upon a hit. It can kill an infantry player in three hits if the shell directly impacts the body, and does very little damage to tanks and heavy armored vehicles. The weapon overheats after about seven seconds of sustained automatic fire.

Retrieved from "https://battlefield.fandom.com/wiki/Flak_38?oldid=381725"
Community content is available under CC-BY-SA unless otherwise noted.