The Einstossflammenwerfer 46 was a hand held single shot flamethrower designed in Germany during World War II and introduced in 1944. It was engineered to be both cheap and easily mass-produced. The disposable weapon fired a half-second burst of flame of up to 27 meters. It was issued to the Volkssturm or the Werwolf movement, but also used by German paratroopers.[1] 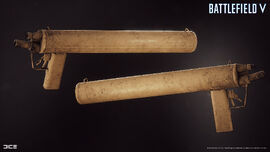 The Flamethrower Pistol is a gadget set to be introduced to Battlefield V. It was first seen in the Battlefield V - Chapter 4: Defying the Odds Trailer.

Originally intended for use by the Rifleman, a scrapped Assault Class Archetype, it was repurposed as a gadget used by the Shock Trooper subclass in the also scrapped 5v5 competitive gamemode. It is now planned to be implemented in a future, yet unannounced Tides of War chapter following Defying the Odds.

Retrieved from "https://battlefield.fandom.com/wiki/Flamethrower_Pistol?oldid=367079"
Community content is available under CC-BY-SA unless otherwise noted.