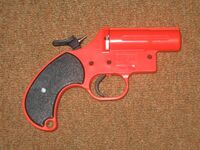 A Flare Gun is a pistol-like device that shoots an incendiary flare. Its main purpose is for signaling, as the lit flare is visible for miles, and can be supplemented with a drag chute that causes the flare to linger in the air longer.

Flares can also be used at night, providing quick illumination of a wide area. The strong flame can also be used to ignite flammable materials from a distance, though the short barrel of the gun typically limits such use. The most common type of flare gun during World War I and World War II were Very Lights which have a single action trigger mechanism, hammer action, center fire pin. Modern variations function in a similar manner and are frequently made out of brightly colored, durable plastic.