Request Reinforcements is an available combat expertise training option in Battlefield Play4Free. Since it is found on the first tier, only 1 training point is necessary to unlock it. Spending additional training points on this skill will significantly reduce the reload time. It is for Assault players only and is represented by an emergency-flaregun.

A similar training option is available to the Medic Class, known as Front Line Medic.

When activated, the player's teammates that died in his general area will respawn on him. This option is outstandingly good when it comes of need of backup behind enemy lines, making flag capture easier. However, the effect will cancel and its painfully slow "reload" time will start as soon as the player using it dies or enters a vehicle, may causing the user to miss a golden opportunity which could make a difference in the game. 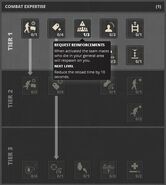 Symbol of Request Reinforcements, as seen on the Weapons inventory
Add a photo to this gallery
Retrieved from "https://battlefield.fandom.com/wiki/Flare_Gun/Play4Free?oldid=363883"
Community content is available under CC-BY-SA unless otherwise noted.