Forest Combat is a Codex Entry featured in Battlefield 1 It is unlocked upon making it through the forest without any melee kills in the chapter Fog of War in the mission Through Mud and Blood. 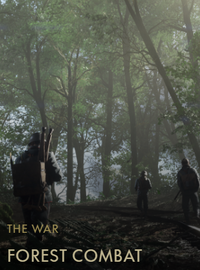 The French-American attempt to push the German Army out of the Argonne Woods in 1918 soon proved to be a nightmare for the attackers. Machine guns hidden in bushes and earthworks fired on advancing troops, while concealed marksmen waited silently for unsuspecting attackers.

Retrieved from "https://battlefield.fandom.com/wiki/Forest_Combat_(Codex_Entry)?oldid=343404"
Community content is available under CC-BY-SA unless otherwise noted.