Fort De Vaux is a Codex Entry featured in Battlefield 1, introduced in the Battlefield 1: They Shall Not Pass expansion. It is unlocked upon winning one game on Fort De Vaux. 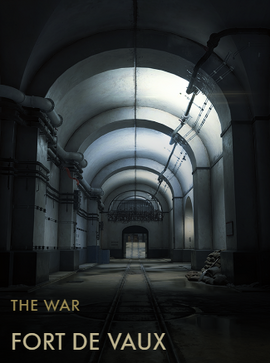 The fortress of Vaux endangered the German left flank as their infantry advanced on Verdun, and German high command ordered it taken at all cost, but the 600 man Fort garrison under Major Sylvain-Eugene Raynal would sell their lives dearly. With machine-gun fire from counterscarped galleries they defended the entrance to the fort, inflicting heavy causalities on the German attackers. The Germans couldn't stay out in the open under the merciless French artillery, so they had to force their way into the fort's subterranean levels. Engineers breached the heavy steel doors with grenade-bundles, and flame-throwers spewed into the dark narrow corridors ahead. The defenders barricaded themselves behind sandbags and for nearly 5 days French grenadiers and machine-gunners held their own in vicious close combat fighting. Smoke, gas, and fumes made sleeping impossible, and forced the soldiers to fight in total darkness between the dead bodies in the narrow corridors. As attempts to relieve the fort from outside failed, the situation grew grimmer by the hour, and the French defenders began to die of thirst and sickness. After his final carrier pigeon failed to bring relief, Major Raynal surrendered to the German forces.

Retrieved from "https://battlefield.fandom.com/wiki/Fort_De_Vaux_(Codex_Entry)?oldid=343337"
Community content is available under CC-BY-SA unless otherwise noted.