A fragmentation grenade, or Frag Grenade for short, is a type of lethal grenade that releases high-speed fragmentations during the explosion to harm enemy infantry. These grenades may use either time fuse or impact fuse, and come in a variety of sizes. They are one of the most common grenades in a modern battlefield, and are often synonymous with Hand Grenades.

Frag Grenades had appeared in all games in the Battlefield series. The Frag Grenade is often the standard grenade available to players, and all use a timed fuse with a simple area-of-effect damage model.

Other fragmentation grenades in real life such as Impact Grenades or Mini Grenades are also depicted in Battlefield games, but they have slightly different properties to merit distinct categories.

In Battlefield 1942, Grenades are issued to all classes, except the Engineer Kit. They can cause a large amount of damage over a large radius, easily killing infantry in a single blast, but it takes 3 seconds before detonating, so tracking a target is required to kill. Throwing them in bottle neck positions, such as bridges or in buildings, can easily clear a large amount of infantry.

[1]
"The hand grenade, an effective fragmentation explosive, can be thrown long-distance or rolled for more accurate placement. It has a four second fuse."

In Battlefield 2, hand grenades are standard issue to each playable faction. They are found on all Kits except the Assault Kit. They do high damage in a small radius. Scoring a direct hit with the initial throw will kill the target instantly.

In Battlefield 2: Modern Combat, hand grenades are only issued to the Assault and Support kits, the former of which also receives an underbarrel grenade launcher and AN-M8 Smoke Grenades.

9m
"Hand-thrown, the FRG-1 is a modernized Fragmentation Grenade which yields a small but highly lethal explosive radius. By substituting the traditional TNT filler with the RDX chemical compound, PNC (polyethyl nitrate cyclobutane) the grenade offers a lighter grenade with enhanced effectiveness."

In Battlefield 2142, two FRG-1s are available as the first Player Ability Unlock.

In Battlefield: Bad Company, HG-2s are given to the Assault, Specialist Kit and Demolition Kit. It is a secondary weapon, so one must switch to it and then throw it. It inflicts high damage to infantry, often killing with a single grenade, but has relatively no effect to vehicles. With the amount and effectiveness of grenades, many players simply throw grenades at enemy bases until they get a kill; this is known as grenade spamming.

Each Kit has a maximum of 5 grenades.

The HG-2 in Battlefield: Bad Company

In Battlefield Heroes, there are two varieties of the hand grenade. The grenade can only be used by the Soldier Class, either using it as an explosive weapon or through the ability "Grenade Spam." 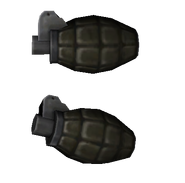 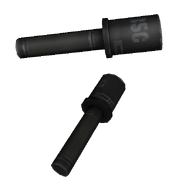 In Battlefield 1943, Hand Grenades are given to the Rifleman Kit and Infantry Kit for the IJN (Type 97) and the USMC (Mk.2).

Each Kit has a maximum of 2 grenades (once all used, the amount "regenerates").

A Type 97 hand grenade being armed in Battlefield 1943

In Battlefield: Bad Company 2, the grenades are always given to the player, in both single player and multiplayer.

The Hand Grenade is a gadget featured in Battlefield Play4Free for every kit. It can be obtained using points in the tier 1 equipment expertise Frag Grenade training option. Its explosion range is about 5 meters; higher levels of the Frag grenade training option increase the number of grenades carried and their damage against vehicles.

[3]
"A common defensive hand grenade, the M67 has a 3.5 second fuse and can be thrown approximately 30 meters by the average soldier. The lethal effect of this grenade is limited against targets with modern body armor."

The M67 Grenade is a grenade featured in Battlefield 3. It is unlocked by default for all kits, and cannot be replaced.

3 grenades (SP)
"Standard timed fuze hand grenade with all around performance and balanced range and damage."

Hand grenades return in Battlefield 4 and function similarly to its predecessor Battlefield 3. The M67 Frag is the default for all players. However, new grenades types have been added including the M34 Incendiary, M84 Flashbang and hand-thrown Smoke Grenades. The M67 hand grenade deals the most damage at once of all of these and has a larger radius, but each kit only gets one M67 hand grenade.

"Standard timed fuze hand grenade with all around performance and balanced range and damage."

The M67 Grenade is a gadget featured in Battlefield Hardline. It is the default grenade issued to players and is one of two explosive grenades available, the other being the Molotov/Incendiary Device which have an initial blast. The M67 does the most direct damage of any of the grenades and has a large blast radius, capable of killing nearby players in one blast. However, unlike most of the other grenades, except for the M18 Smoke, only one M67 is given to each kit and they take a very long time to resupply from Ammunition Boxes.

This item has a Codex entry: Hand Grenades

The Frag Grenade returns in Battlefield 1 as one of many grenade types available, inflicting up to fatal damage against infantry and minor damage against vehicles. The full lineup resembles that of Battlefield 4, with the addition of two Anti-Tank Grenades and a Gas Grenade.

All infantry except Support

The Frag Grenade appears in Battlefield V, functioning in a same manner as in Battlefield 1. It is the default grenade for all infantry kits except for Support that cannot equip it. The appearance of the grenade changes depending on what faction a player is assigned to.

2 grenades
The Frag Grenade is a gadget featured in Battlefield 2042. It is an available option for all Specialists.