In Battlefield: Bad Company 2, the grenades are always given to the player, in both single player and multiplayer.

In single player, the player starts off with four grenades as default, and can refill them from dead enemies, ammunition boxes or Supply Crates. The hand grenades are very useful against AI soldiers, as the AI infantry have low health and commonly don't react to grenades thrown near them, and can also be useful at creating easy fire zones or "rat-runs", which can be very useful in levels such as Sangre del Toro and Snowblind, where buildings are commonly present. However, against vehicles and other structures such as bridges and towers, the M2 Carl Gustav and C4 satchels are much more effective than the hand grenade.

In multiplayer, the player only spawns with a single grenade without equipping the Grenade Vest specialization, though this can be refilled through the use of ammunition boxes. Even though it can be thrown a considerable distance, throwing one accurately at long range requires practice. Grenades have a long fuse, so the movement of enemy players must be accounted for along with the surface the grenade will land on, because it may roll and bounce if it lands on a slanted surface. It can be held indefinitely and even canceled if the opportunity disappears.

A single grenade can kill an enemy at full health, although the target needs to be in close proximity to the grenade for this to happen. However, the wide 2.9 meter blast radius of the grenade makes it a good assault weapon, injuring hostile players, eliminating soft pieces of cover and generally forcing enemy players to reposition, which can be useful in close-quarter combat, such as on White Pass or Isla Inocentes. When a player throws a grenade at an enemy, the enemy will audibly yell out a warning to team-mates in the area. This allows the player to identify the presence of enemies inside the target zone and potentially injure or kill some of them before breaching. Also, both sides will be alerted of thrown grenades with a small orange grenade shaped symbol with a flashing arrow under it when a grenade is thrown near their position.

Grenades can work well against vehicles such as the ATV or Personal Watercraft, due to their lack of armor and low damage threshold, as well as even larger wheeled vehicles if the grenade lands directly beneath the vehicle. However, Tanks and APCs take little damage from grenades, so this method is not advisable unless they only have minimal health remaining. 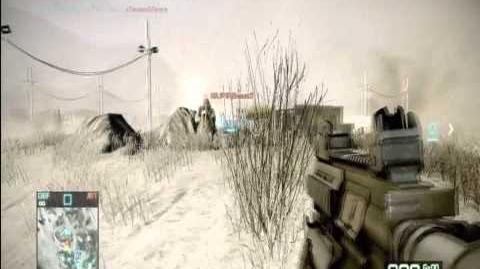 The Hand Grenade in Battlefield: Bad Company 2 iOS.
Add a photo to this gallery

Retrieved from "https://battlefield.fandom.com/wiki/Frag_Grenade/Bad_Company_2?oldid=365137"
Community content is available under CC-BY-SA unless otherwise noted.