[1]
"A common defensive hand grenade, the M67 has a 3.5 second fuse and can be thrown approximately 30 meters by the average soldier. The lethal effect of this grenade is limited against targets with modern body armor."

The M67 Grenade is a grenade featured in Battlefield 3. It is unlocked by default for all kits, and cannot be replaced.

Players have the option to immediately throw a grenade (like the "Quick Slash" for the Knife), equip it as a wielded weapon (like in older games), or assign both actions via key binding. There is an option to hold the grenade on consoles by pressing L2 (PS3), LB (Xbox) and then holding down Fire. This gives the player an advantage by having time to aim and throw the grenade.

An orange dot indicator marks any active grenades including friendly grenades. At close range (where the player can be killed by the blast), the dot is also surrounded by an animated circle. Nearby players will automatically use voice responses when throwing or sighting a grenade.

With the Frostbite 2 engine and Destruction 3.0, hand grenades, and all other weapons, cause more realistic damage. Grenades can kill players through certain kinds of walls due to blast pressure.

Grenades, as well as other explosives, take much longer to resupply from an Ammo Box than firearm ammunition.

Players can toss the grenade high enough to explode just as it returns to ground. This can be used to surprise pursuers if there is not a low ceiling or obstruction above.

The Hand Grenade before it is thrown by Blackburn in Operation Swordbreaker. 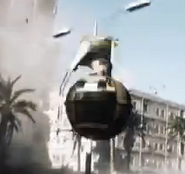 Hand grenade in air.
Add a photo to this gallery

Retrieved from "https://battlefield.fandom.com/wiki/Frag_Grenade/Battlefield_3?oldid=365080"
Community content is available under CC-BY-SA unless otherwise noted.