Army of the French government-in-exile

The Free French Forces (French: Forces Françaises Libres) were a group of French fighters who fought alongside the Allies during World War II following the French surrender, German occupation of France and Vichy French collaboration with Germany.

These forces were led by former General Charles De Gaulle who refused to follow Philippe Pétain's co-operation with Germany. They participated in many major Allied operations, such as the landings on Italy, fighting Vichy France forces in French colonies and the 1944 Normandy landings.

In Battlefield 1942: The Road to Rome, the Free French Forces appear as a part of the Allies. The fight exclusively against the Wehrmacht.

The Free French Forces use identical loadouts to their Road to Rome British counterparts.

The Free French Forces use vehicles provided by its Allied peers, with a vehicle loadout that is mostly identical to the British Army, but with the additional M3 GMC. Most of their vehicles have US Army stars on them with French flags printed on them. Aircraft have the Cross of Lorraine as their roundel (with the Spitfire sporting RAF roundels on its wing). 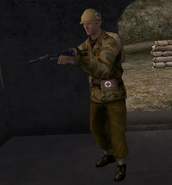 A Free French engineer using an AT-25

The Free French Forces appear during the singleplayer of Battlefield V.

Senegalese Tirailleurs appear briefly in the Prologue in Algeria in 1942, where they are behind enemy lines at Kasserine Pass, where the unit ambushes a German mechanized convoy. The player controls an unnamed Tirailleur in a two-man sniper team, who pick off survivors until strafed by Bf 109s.

The Senegalese colonial troops are the main focus of the Tirailleur war story, where they appear alongside indigenous French troops during the campaign in Southern France in 1944. Protagonist Deme, and characters Idrissa and French Captain are all members of the Free French Forces.

Free French Senegalese Tirailleur are distinguishable by their khaki trench coats and grey-blue Adrian helmets. Weapons wise, they mostly use the Lee-Enfield No.4 Mk I, with the Chauchat and M1A1 Carbine being rarely used. In certain cutscenes they use Kar98ks.

Although France does not appear as its own faction in multiplayer, the United Kingdom faction has access to several cosmetic items based on Free France, notably the Liberté and Armée Secrète sets. In addition, Hanna Delacroix is a member of the Free French military that fights with the British. 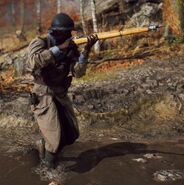 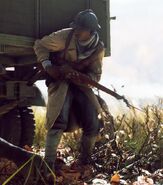 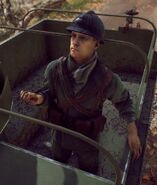