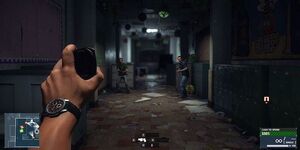 Freeze is a feature in the Battlefield Hardline singleplayer campaign.

When approaching a group of up to three enemies who are not already in combat, the player presses Throw grenade, flashing their badge and pointing his weapon at the enemies. They will drop their weapons and put their hands up. The player must quickly switch his aim between all of the enemies. If one enemy is not aimed at for a few seconds, he will pick up his weapon and attack the player.

In order to arrest multiple suspects (although arresting 2 on your own is feasible), the player's partner Khai will have to hold her gun on them while the player arrests each one. The player must make sure that Khai is nearby for backup when attempting to arrest a group of criminals. If there is only one criminal, the player can easily arrest without backup. The other way of doing it is to try to ensure all the suspects are in a roughly straight line, one behind each other as the player flashes their badge. That way, there is no need to switch aim, since all the suspects are in the line of fire.

Note that any enemy that is not present when the player starts the arrest will not surrender if he walks into the scene: he will open fire upon seeing the player. Situational awareness is recommended, by using the Police Scanner to survey the surrounding area for additional threats before starting the arrest.