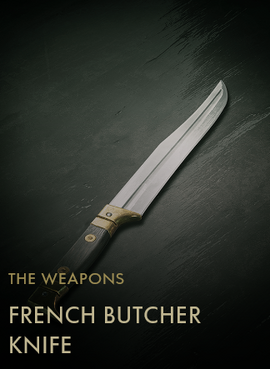 At the start of WW1 French soldiers were not issued knives, and were supposed to rely on their bayonets, but as soon as trench warfare set in the long rifles with bayonets proved unwieldy in the confined space of the trenches. This led to the French Army from the beginning of 1915 distributing large numbers of civillian knives in many variations, the most common being the Butcher's Knives of which 200,000 were issued from July. Between 25 and 30 cm long, they were issued together with a rudimentary sheath made of textil or leather. The Butcher's Knives were not very popular with the troops, probably due to the lack of hand guard.

Retrieved from "https://battlefield.fandom.com/wiki/French_Butcher_Knife_(Codex_Entry)?oldid=343232"
Community content is available under CC-BY-SA unless otherwise noted.