This item has a Codex entry: Dawn of Dogfights

"Battle for air supremacy as a volunteer pilot in the British Royal Flying Corps."

Friends In High Places is one of the chapters featured in the singleplayer campaign of Battlefield 1.

In this mission, players assume the role of Clyde Blackburn, an American pilot in the Royal Flying Corps. Blackburn is tasked with flying a Bristol F2.A along with a gunner/photographer named Wilson in various reconnaissance and combat missions around the Western front of the war.

Clyde Blackburn is playing a game of cards with a British pilot named George Rackham, and ultimately loses against him in an attempt to win his plane. However, Blackburn tied him to a chair beforehand, giving him an opportunity to steal his Bristol F2.A and impersonate as him.

Blackburn then approaches a gunner named Wilson, and introduces one to the other, as they head to the Vosges mountain range, training in the basics of dogfighting. During a testing with the plane's rockets, a squadron of German Fokker Dr.I aircraft attacks, downing the other plane with them and forcing Blackburn and Wilson to fight them off. Defeating all but one of them, Blackburn decides to tail the lone Fokker Dr.I.

"Lead the attack on a major German frontline fort."

While pursuing the German pilot, the duo came across an entrenched German fortress and munitions base. While under heavy fire, Wilson manages to procure photographs of vital German logistics.

After presenting the intel to the command, back at HQ, he comments on Blackburn's flying skills as 'one hell of a pilot' and is once again tasked with Blackburn to help defend an RAF bombing raid that would change the course of the war.

After defeating multiple AA positions, the Germans get desperate and dispatch dozens of warplanes in a bid to stop the incoming airstrike. Thanks to Blackburn's flying and Wilson's aim, the bombers deliver their payload, levelling the entire fortress.

During the assault, Blackburn's plane gets caught in a bomb explosion, crippling it and forcing him to bail out deep within German territory.

Blackburn landed half a mile west from the munitions base, believing that Wilson didn't make it out. Regardless, he sneaks his way through the German defensive line, under the cover of night. When he thought that he was clear from the enemy patrols, he encounters Wilson at the crash site just as the enemy begins launching an attack on the British trenches.

Wilson was impaled on the wing of the downed Bristol and insists leaving his gunner alone to die, and would continue on to HQ but Wilson pleads and tells that he was a liar, who will kill him.

Blackburn grabs a wooden part from the plane and attempts to kill Wilson but he would always know that indeed he wasn't Rackham, known for not cracking a smile.

After freeing Wilson, Blackburn began to carry him onwards towards the Allied positions, avoiding German soldiers and Allied spotlights scanning the rain-soaked No Man's Land, ready to order the machine gun bunkers to shoot at anything caught within their glance.

When the two make it back into the trenches, he takes him to the nearest medic to be patched up and that was where Blackburn realised that he was indeed a liar.

At the medic's tent, soldiers commend Blackburn's heroism for bravely carrying Wilson through No Man's Land back home when Rackham suddenly appears, insisting Blackburn is a criminal.

Blackburn was promptly arrested and awaits for a court martial. While smoking on the railings of a Navy warship on the River Thames in London, England, he encounters Wilson, who says that he will speak out for him, but Blackburn denies it.

Suddenly, a German air raid attacks the city. Rackham goes to Wilson needing a gunner, and Blackburn volunteers, but Rackham denies him saying he doesn't deserve to fly. A German Fokker Dr.I performs a strafing run on the ship, killing Rackham and his bodyguard. Wilson frees Blackburn and they then take the Bristol to help fight off the German air assault.

Along with the Royal Flying Corps, Blackburn and Wilson fight off three waves of the German raid in their Bristol. The first wave consisted of a large Fokker Dr.I squadron, followed by a wave consisting of Gotha G.IV bombers and their Fokker Dr.I escorts. After shooting down the enemy bombers, Blackburn spots two zeppelin bombers as part of the final wave, and takes on the challenge to shoot them down, much to Wilson's dismay. Blackburn successfully shoots down one of the airships, but as he began to taunt an AA gunner on the other airship, the gunner shoots his plane and Blackburn lands on top of the damaged airship.

Blackburn proceeds through the interior of the zeppelin, killing the German soldiers in his way. In the end, he encounters the AA gun, kills the gunner and takes it for himself and uses it against the remaining L30s and squadrons of enemy planes.

After destroying a third zeppelin, a German soldier knocks him off but Wilson intervenes, and the two engage in a fistfight. A final Airship L30 arrives and is quickly destroyed by Blackburn, but it begins to crash into the airship Blackburn, Wilson and the German soldier were on. The three men then jump off the airship into the River Thames, as the four downed zeppelins fall and burn in the London skies, marking the defeat of the German air raid and successful defense of the city.

Blackburn gets up to the ground from the water, with neither Wilson nor the German soldier in sight. He tells the player that his story had different versions, including one where he kills Wilson in no man's land, murdered his way through the Western Front, and escaped in the chaos of the air raid rather than stay and help. Now proven to be an unreliable narrator, Blackburn insists to the player that his story is the truth, and that he wouldn't tell the story if it wasn't, before breaking the fourth wall and directly looking into the camera and asking the player, "Would I?" 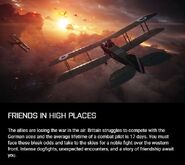 Retrieved from "https://battlefield.fandom.com/wiki/Friends_In_High_Places?oldid=330332"
Community content is available under CC-BY-SA unless otherwise noted.