The Frommer Stop Pistol is a Codex Entry featured in Battlefield 1. It is unlocked upon obtaining ten kills with the Frommer Stop. 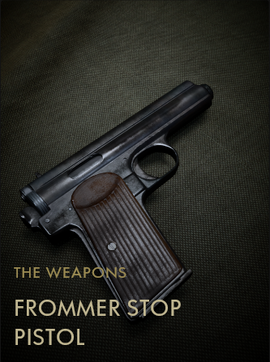 During the founding of the Austro-Hungarian Empire, a settlement was made that allowed Hungary to have its own home defense army, the Honvedseg, which gradually got more and more equipment of its own and by World War 1 was a full-fledged army. In 1912 the Hungarian Army officially adopted the native-designed Frommer Stop pistol as the Pisztoly 12M.

The original Stop name literally referred to its ability to stop an opponent. The Frommer Stop used a long recoil system, which is very unusual for a pistol, making it a complicated and expensive design. They were robust and well-built, however, and functioned well with proper maintenance. The Frommer Stop pistols continued to serve with Hungarian military and police until about 1945, and were also used by Germany, Turkey and Bulgaria, and it is estimated that well over 300,000 were produced.

The Frommer Stop design would also be converted into various fully automatic assault weapons of the Austro-Hungarian Empire during WW1.

Retrieved from "https://battlefield.fandom.com/wiki/Frommer_Stop_Pistol_(Codex_Entry)?oldid=343147"
Community content is available under CC-BY-SA unless otherwise noted.