For the gamemode, see Frontlines

Frontlines is a Codex Entry featured in Battlefield 1, introduced in the Battlefield 1: They Shall Not Pass expansion. It is unlocked by winning one game of Frontlines. 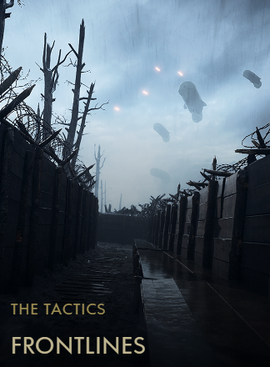 'The staggering and unprecedented casualties of the first months of the war made it clear that the era of the mass infantry charge over open ground was definitely over. New tactics of trench warfare had to be established and taught to combat the strong German offensives. While organization into battalions continued, it was the smaller fighting group of around 20 men, led into combat by a junior officer, that was now most effective in frontline combat. The French army fielded the strongest artillery force of the war, and with the invention of the "creeping barrage" it was able to allow specialized assault squads to advance behind a curtain of shells and breach the German positions. A new form of column tactic was also introduced that allowed for a more concentrated attack. Positions that were taken were immediately fortified against potential counter-attacks, and "nettoyer de trache" groups, heavily supplied with grenades, would be send out to deal with nests of resistance. The concept of "walking fire" was introduced, and every squad was outfitted with at least one Chauchat light machine gun to provide suppressing fire.

Retrieved from "https://battlefield.fandom.com/wiki/Frontlines_(Codex_Entry)?oldid=343368"
Community content is available under CC-BY-SA unless otherwise noted.