For the automatic variant, see G18

The Glock 17 is an Austrian handgun first produced by Glock in 1982 and chambered in the common 9x19 Parabellum cartridge. Throughout the Glock 17's lifespan several variants such as the Glock 18 have been produced.

It is a very popular pistol, in service with military forces and law enforcement worldwide. It is also very common in the civilian market.

The G17 is a weapon featured in Battlefield 2: Modern Combat and is the standard sidearm issued to all EU kits. It features a moderate rate of fire.

Reloading the G17.
Add a photo to this gallery

15 meters
""Take care" of your target up close and silent."

Jimmy's Suppressed G73 is a weapon featured in Battlefield Heroes. Available for the National Army, it was introduced in the Agents bundle on August 15, 2012. Its counterpart is Sam's Silenced Sidearm for the Royal Army.

563m
"The G17C pistol is part of a large series of pistols from an Austrian manufacturer. Chambered in 9mm, this full sized combat pistol features a polymer frame and anti-corrosion surfaces that make it incredibly reliable. The G17C is incredibly popular with both Police and Military units worldwide. This G17C has been equipped with an integral Laser Sight that makes unaimed fire more accurate."

The G17C is a weapon featured in Battlefield 3.

The G17C can be seen in holsters of the PLR troops, though they only use them against the player in Operation Guillotine if the Quick Time Event is failed. It is never available to the player.

The G17C is an unlockable sidearm, awarded at Rank 4. It has a 17+1 capacity, with low recoil, a moderately high fire rate, and medium power. It is statistically nearly identical to the MP443, although the G17C has a higher bullet velocity. It has an attached laser, which can be toggled on and off while in use.

At rank 19, a suppressed version is unlocked, which also has a laser, making it the only sidearm available to all players able to use two attachments, without the End Game expansion pack.

The G17 in gameplay.

The G17C Master Dog Tag.
Add a photo to this gallery

In Battlefield 4, Glock 17 pistols can be seen wielded by Pac, Hannah, Garrison, and Kovic throughout the campaign, but is not usable by the player.

Recker is seen holding a Glock 17 fitted with a Tactical Light on the cover of Battlefield 4.

36 + 18 rounds (SP)
"The G17 is a highly popular pistol. The G17 has almost no muzzle climb, which makes it possible to rapidly unleash a string of accurate rounds."

The G17 is commonly carried by enemies in most episodes. It can first be picked up in Back to School. Once it has been picked up, it can be selected for the player's loadout in any episode.

The G17 is an unlockable handgun for the Operator kit, and is available to both factions upon completing the Operator Assignment 2. It comes with Improved Iron Sights by default.

The G17 can give the player a large advantage in combat, as it has the lowest recoil and best accuracy in its class, medium power, and a high capacity. Its most unique trait it its incredibly high firecap, potentially firing as fast as 900 rpm, provided the player has a fast trigger finger, while other semi-automatic pistols can only reach 400 rpm.

Marcus Boone with a G17.
Add a photo to this gallery

The G17 Race Pistol is a weapon that was released in a patch alongside the Battlefield Hardline: Getaway expansion.

It is a Glock 17 outfitted as a racegun, permanently equipped with a Compensator and a Coyote sight attached to a pistol shroud and cannot equip any attachments, but can still use metallic paints. It is more stable than the normal G17, but has slightly more spread when continually firing due to the Compensator. 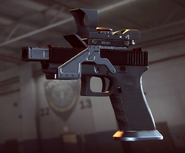 Coyote sight
Add a photo to this gallery

Retrieved from "https://battlefield.fandom.com/wiki/G17?oldid=371035"
Community content is available under CC-BY-SA unless otherwise noted.