For the semi-automatic variant, see G17

The Glock 18 is a selective-fire machine pistol variant of the 9mm Glock 17 handgun. Austrian made, the Glock 18 was made at the request of the Austrian counter-terrorist unit EKO Cobra. The fire selector on the gun's slide allows the pistol to be fired in either semi or fully automatic, its fully-automatic fire mode being able to fire at 1,100-1,300 rounds per minute, making it a very useful sidearm in the right hands. Its magazine capacity can vary between 10 and 33 rounds.

0.5
11.0
"Essentially an Automatic version of the G17C, the G18 was developed for the Austrian EKO Cobra counter-terrorist force. Classified as a Machine Pistol, the G18 has been equipped with a number of modifications to allow greater control over its very rapid fire. Regardless, the G18 in Automatic is incredibly difficult to fire effectively at anything other than extremely short ranges."

The G18 is a sidearm featured in Battlefield 3. It is unlocked at Rank 30 and the silenced variant at Rank 41. The G18 has a rate of fire of 900 rounds per minute and possesses a 19+1 round magazine.

The G18 can be switched between full and semi-automatic fire modes. It deals low damage, but offers decent accuracy, a large magazine, high rate of fire, and moderate recoil. It is recommended that this gun is only used fully automatic at close range.

The 100 kill Service Star dog tag and 500 kill 5 Service Star Dog tag for this weapon can only be unlocked by using the non-suppressed version of this pistol.

View through iron sight.
Add a photo to this gallery

The G18 is a sidearm featured in Battlefield 4. The only fully-automatic handgun of the 9mm group, it possesses an extremely high rate of fire, and high recoil accompanying that rate of fire. Along with 93R, it is the only 9mm handgun which does a different damage from the others, doing significantly less damage at close range, taking at least six shots to kill, and has slightly higher spread (this is to compensate for the full-automatic-capability). At long ranges, it takes up to ten shots to kill. 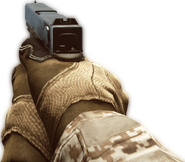 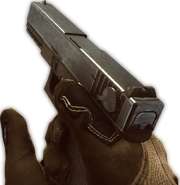 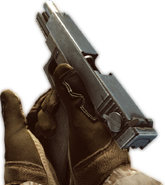 The G18C is a machine-pistol featured in Battlefield Hardline. It is the default sidearm for the Professional kit. It has the second highest rate of fire of its class, allowing it to perform well in close quarters. However, its high recoil makes it very hard to control in fully automatic, and it has the second smallest magazine size of the machine-pistols. This reduces its effectiveness at range, making it more suited to functioning as a close-range backup weapon.

Retrieved from "https://battlefield.fandom.com/wiki/G18?oldid=362851"
Community content is available under CC-BY-SA unless otherwise noted.