The GOL (also known as the Gol Sniper Magnum) is a German bolt-action sniper rifle produced by Gol-Matic GmbH and in current used by German police units and the Lithuanian Armed Forces. It is based on the Mauser M98 Magnum system and can be used in a tactical or a sporting set-up.

Battlefield: Bad Company Official Prima Guide
"German bolt action sniper rifle. This highly accurate and reliable rifle is available in a wide range of configurations and is currently used by several German police units as well as sporting groups across the world."

The GOL is a sniper rifle featured in Battlefield: Bad Company.

The GOL can be found during the final mission, Ghost Town, being used by Middle Eastern Coalition snipers or as a collectible, located in a circle of sandbags at the barracks in between the first and second objectives.

The GOL is the default sniper rifle issued to the Middle Eastern Coalition Recon kit. It has high accuracy and deals high damage, but in exchange has a low rate of fire with its bolt action and has some bullet travel time.

It comes with a 6x magnification scope attached to the weapon and can kill in one hit with headshot or any part of the body in close quarters, but requires two shots to the body at longer ranges. It is the Middle Eastern Coalition's equivalent to the American M24 and Russian SV98.

The GOL in Battlefield: Bad Company on the multiplayer level Oasis

"With outstanding accuracy this rifle provides exceptional performance in difficult situations. Its long range and pinpoint accuracy makes it the rifle of choice with German police agencies and counter terrorist units."

The GOL Sniper Magnum is a weapon featured in Battlefield: Bad Company 2, being the fifth sniper rifle issued to the Recon kit requiring 21,000 points to unlock.

It is an extremely accurate, bolt-action sniper rifle capable of neutralizing targets at medium to long range. Headshots from any range and close range shots are one hit kills while other shots to the body at longer ranges are two hit kills.

The weapon has slight bullet drop and bullet travel time so to consistently hit targets at extreme distances will require leading the shots and aiming slightly higher above the target. This weapon is very helpful in extreme distances because the thin crosshairs of the scope make it easier to line up against targets.

The weapon has a 6x magnification scope by default, though the scope can be replaced by a Red Dot Sight, a 4X Rifle Scope or a 12X Zoom Scope. It may also be fitted with a Sniper Spotting Scope, although this attaches to the scope, and does not replace it.

It should be noted that it is the only sniper rifle whose scope does not have mil-dots (though this has little effect unless engaging targets at extreme distances, such as at Arica Harbor).

The view through the GOL Sniper Magnum's scope 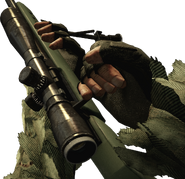 The furthest an enemy can be for the GOL to do its highest damage at 10m.

The closest that an enemy can be for the GOL to do its lowest damage at 36m.

alchemical.cc
"The GOL sniper rifle is renowned exceptional precision and adaptability. Its outstanding accuracy over very long range and quick bolt action makes GOL the obvious choice for any marksman wishing to put a good distance between him and the target or to engage in counter sniping."

The GOL is a bolt-action sniper rifle featured in Battlefield Play4Free. It is a low damage, high velocity sniper rifle. It is relatively cheap, both unlocked and before unlock, allowing players to gain access to a decent bolt-action sniper for a low price. It has an average rate of fire with long range and a small magazine.

More detailed look of the GOL in Play4Free 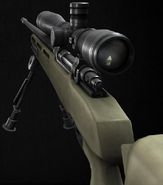 "German bolt action sniper rifle. This highly accurate and reliable rifle is available in a wide range of configurations and is currently used by several German police units as well as sporting groups across the world."

The GOL Magnum is a weapon featured in Battlefield 4: Second Assault. It is unlocked upon completion of the Eagle's Nest assignment.

The GOL Magnum has high damage with one shot kill to the chest and up and retains very fast handling and reload making the weapon useful for an aggressive recon role.

The fast bolt pull can be made even faster with the straight pull bolt attachment making extremely quick follow up shots without taking eyes off the target. However, the GOL Magnum has a low magazine capacity of 5 + 1 rounds making reloads frequent. 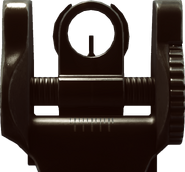 The GOL Sniper Magnum is a weapon featured in Battlefield 2042, available exclusively in the Battlefield Portal for the BC2 Recon class.